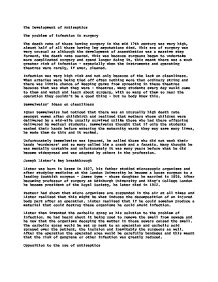 The Development of Antiseptics.

The Development of Antiseptics The problem of infection in surgery The death rate of those having surgery in the mid 17th century was very high, almost half of all those having leg amputations died. This era of surgery was very unusual as although the development of anaesthetics was a massive step forward, the death rate soared. This was because surgeons began to undertake more complicated surgery and spend longer doing it, this meant there was a much greater risk of infection - especially when the instruments and operating theatres were rarely, if ever, cleaned. Infection was very high risk and not only because of the lack on cleanliness. When arteries were being tied off often nothing more than ordinary string and there was little chance of keeping germs from spreading in these theatres because that was what they were - theatres. Many students every day would come to them and watch and learn about surgery, with so many of them so near the operation they couldn't be a good thing - but no body knew this. ...read more.

Pasteur had shown that micro organisms are suspended in the air at all times and Lister realised that this might be what induces the decomposition of an injured body part after an operation. Lister realised that if he could somehow produce a material that could destroy these organisms he could avoid infection. Lister then invented the carbolic spray as his solution to the problem of infection. He had heard about it being used to remove the smell from sewage and he new that the organisms decaying the matter in those sewers caused the smell. The carbolic spray would be set up next to an operation and carbolic acid sprayed over the patient, the incision and inevitably the surgeons as well. After the operation the operated area would be carefully bandages and this meant that the risk of gangrene or other infection was greatly reduced. Opposition to the use of antiseptics There was much opposition to Lister's proposals for a number of reasons. Firstly, he was often see as a fanatic, the carbolic spray seemed 'extreme' as it soaked the patient and surgeons as well as the acid in the spray being strong enough to crack the skin. ...read more.

The development of aseptic surgery The practice of aseptic surgery was quite different to that of antiseptic, the discomfort of surgeons called for a new way to fight infection. In the process of asepsis equipment was produced to sterilize all equipment as well as clothes and sheets. All doctors and nurses started to ware gloves, masks and later hats as they realized all these areas could lead to the spread of germs. These methods are still used today and even the air in modern theatres is treated to remove any possible organisms. There is a big difference between antiseptic and aseptic surgery. Antiseptics are used to kill organisms that are there in the theatre so that they don't infect whereas asepsis is used to remove any germs from the theatre in the first place and stop germs coming into contact with the body at all. This is why so many methods of sterilization and protection for the doctors were developed so that germs originating from many different places were prevented from effecting the operations. ...read more.

A good overview of the development of antiseptics and the role of scientists involved. In places more precise use of language would have improved the quality.