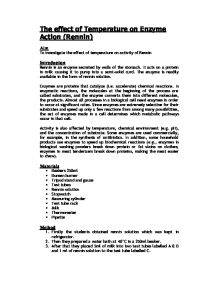 The effect of Temperature on Enzyme Action (Rennin)

The effect of Temperature on Enzyme Action (Rennin) Aim To investigate the effect of temperature on activity of Rennin Introduction Rennin is an enzyme secreted by walls of the stomach. It acts on a protein in milk causing it to pump into a semi-solid curd. The enzyme is readily available in the form of rennin solution. Enzymes are proteins that catalyze (i.e. accelerate) chemical reactions. In enzymatic reactions, the molecules at the beginning of the process are called substrates, and the enzyme converts them into different molecules, the products. Almost all processes in a biological cell need enzymes in order to occur at significant rates. Since enzymes are extremely selective for their substrates and speed up only a few reactions from among many possibilities, the set of enzymes made in a cell determines which metabolic pathways occur in that cell. Activity is also affected by temperature, chemical environment (e.g. pH), and the concentration of substrate. Some enzymes are used commercially, for example, in the synthesis of antibiotics. ...read more.