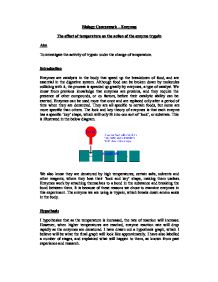 The effect of temperature on the action of the enzyme trypsin

Biology Coursework - Enzymes The effect of temperature on the action of the enzyme trypsin Aim To investigate the activity of trypsin under the change of temperature. Introduction Enzymes are catalysts in the body that speed up the breakdown of food, and are essential in the digestive system. Although food can be broken down by molecules colliding with it, the process is speeded up greatly by enzymes, a type of catalyst. We know from previous knowledge that enzymes are proteins, and they require the presence of other compounds, or co factors, before their catalytic ability can be exerted. Enzymes can be used more that once and are replaced only after a period of time when they are denatured. They are all specific to certain foods, but some are more specific than others. The lock and key theory of enzymes is that each enzyme has a specific 'key' shape, which will only fit into one sort of 'lock', or substrate. This is illustrated in the below diagram. We also know they are denatured by high temperatures, certain salts, solvents and other reagents, where they lose their 'lock and key' shape, making them useless. Enzymes work by attaching themselves to a bond in the substance and breaking the bond between them. It is because of these reasons we chose to examine enzymes in this experiment. The enzyme we are using is trypsin, which breaks down amino acids in the body. Hypothesis I hypothesise that as the temperature is increased, the rate of reaction will increase. However, when higher temperatures are reached, enzyme reaction rate will drop rapidly as the enzymes are denatured. I have drawn out a hypothesis graph, which I believe will be what the final graph will look like approximately. I have also labelled a number of stages, and explained what will happen to them, as known from past experience and research. We know that even without enzymes in the solution, the rate of reaction would still increase, due to the kinetic theory. ...read more.

The graph is shown below: Preliminary Experiment Evaluation As one can see from the above graph, it is very similar to my hypothesized graph. The slight difference may be due to human error, or the length of time in between each check of the tube. As we can see, up to 40 degrees, the rate of reaction steadily increases, and, as I hypothesised, after this point it begins to drop as the enzymes are denatured. We can also see that at 80 degrees the enzymes cannot break down the gelatine at all or very little as they have been completely denatured by the high temperature. It was important that we allowed the trypsin to acclimatise; else we may have found that the enzymes worked quickly on the photographic film and made it transparent before they became denatured. I saw no anomalies in my work; this is a sign of good planning, but I must continue to work effectively in the final experiment to ensure there are no anomalies then. However, after doing the experiment once, there are a number of changes I will make to my work. Instead of checking the tubes every ten seconds, I will check them every five seconds. This will ensure more accuracy, as my results will be more precise. We have obtained 4mm squared photographic film as opposed to 2mm squared photographic film, so that it would take longer for the enzyme to break down the gelatine, and therefore meaning that it give us a more accurate result; it is more easy to accurately measure a long period of time than it is a very short one. This will affect our spread of results, and ensured all tests were accurate. We will also triple the concentration of trypsin to speed the results, but at the same time, as a group, we have all decided we will not stop the stopwatch until the photographic film is completely transparent, without exception. ...read more.

We didn't get any anomalous results because we were precise with our timing, we allowed the enzymes to acclimatise, and we ensured all variables, bar the temperature, were kept constant. We did not have to ignore any results, as they were all relatively accurate to what they should have been. We also know that none of the variables such as pH change or contaminations with fingertips occurred, since there were no anomalies. However, there is always the problem of human error, as they human eye is not a measuring device and works on what the brain deems to be correct rather than precisely measuring what is correct. We could have used a photosensor, which measures how much light passes through it. If we place this behind the photographic film, our results could have been accurate to a fraction of a second. There would also be no problems with human judgement. A light dependent diode could also have been used, and, when connected to a voltmeter, we could work out at how many volts the timer should be stopped (as the LDD works as when the light changes, as does the voltage), also giving us more accurate results, and would be viable to do in a school environment. More accuracy could also be employed with our range of temperatures; the main problem with our graph, is our curve is a hypothesis of what should be in between each number; we do not actually know what the curve looks like in between values. Therefore, for much more accuracy and a more accurate graph curve, we could have done tests every 5 degrees rather than every 20 degrees. This would ensure our graph's line of best fit is the correct shape. We could also have extended our investigation by using different substrates and enzymes, examining how each substance breaks down, and which substrates break down more quickly. For further investigation, we could have even used pH as our independent variable (the one that did not change). However, under the circumstances, I believe that I did fairly well and produced an accurate table of numbers. ...read more.