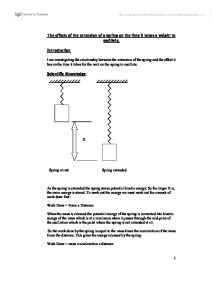 The effects of the extension of a spring on the time it takes a weight to oscillate.

The effects of the extension of a spring on the time it takes a weight to oscillate.

I am investigating the relationship between the extension of the spring and the effect it has on the time it takes for the wait on the spring to oscillate.

As the spring is extended the spring stores potential kinetic energy. So the larger X is, the more energy is stored. To work out the energy we must work out the amount of work done first:

At the centre point Kinetic energy is equal to Potential energy. To work out the kinetic energy:

Points highlighted by the preliminary

We could use a program called log it and light gates with a laptop to make the timing more precise.

So these results back up our scientific knowledge and our prediction within the limits of my range of measurement. It proves that the extension affects how much time it takes for the mass to oscillate because the equation F=MA must be held to.

Our experiment worked quite well and we collected good results. We proved the prediction and backed up the spring constant theory. If we had more time we would have had even better results.

The writer attempted this question to an okay standard. It was good that the writer used their initiative and decided to do background work in addition to a preliminary investigation. However, the background knowledge could have gone into a bit ...

The writer attempted this question to an okay standard. It was good that the writer used their initiative and decided to do background work in addition to a preliminary investigation. However, the background knowledge could have gone into a bit more detail. So for example, when the writer mentioned "At the centre point Kinetic energy is equal to Potential energy" the writer could have explained why this relation is true. The writer could have mentioned units as well, which they don't mention until they are recording data (and still don't mention these units on their graph). Although the preliminary work is not as important as the main investigation, the writer should still have written a list of apparatus and said what they would measure before they even look at the diagram. In addition, even though they said that they decided to not have the 50g reading, they should have still measured it and explained that due to the amount of error within the reading it would make the final results less precise.

The writer should have clearly shown where the main investigation was starting as they made it seem like it was carrying on from the preliminary investigation. Again, in regards to the apparatus they should have mentioned particular measurements or what type of apparatus they where using (so for ruler, how long would it be?) In terms of data, this was collected okay. However, the graphs could have been drawn better. Although it was good that the writer did do error bars. The writer mentioned "I do not have any anomalies as all the points are close to the line." But they could have explained why this is the case. The analysis could have been written better. For example the writer says "The spring would slowly break and deform, this would change the force of the spring therefore making the force not constant." But doesn't explain why (and this could go back to the range of masses the writer chose to use). The conclusion could have gone into more detail (for example, suggesting if the material can have an affect on the spring constant).

For the main body of the report, the writer has used good scientific language, but could have explained precision and accuracy throughout the report. Because they didn't explain their points clearly enough (so for example why a 50g interval for the masses) it meant that the level of analysis was not very deep.

The writer kept switching between saying "I" to "we". This has made the report less valid and what the writer should have done it spoken in first person throughout the entire report. Spelling was good. However, the reader should have proof read through their work in much more detail.