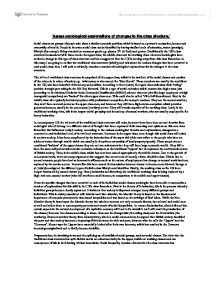 'Assess sociological explanations of changes to the class structure

'Assess sociological explanations of changes to the class structure.' Social classes are groups of people who share a similar economic position; which is based on a person's occupation, income and ownership of wealth. People in the same social class can be identified by having similar levels of education, status (prestige), lifestyle (for example living standard or consumer goods e.g. plasma TV 52' inch) and power. Traditionally the UK's class structure is associated with three-levels: the upper class, the middle class and the working class. However sociologists have noticed a change in this type of class structure and have suggested that the UK is moving away from this class formation. In this essay I am going to outline the traditional class structure (briefly) and talk about the various changes that have occurred to each social class; then I will seek to critically examine a number of sociological explanations for the changes to the class structure. The tri-level traditional class structure is comprised of: the upper class, which is the smallest of the social classes and consists of the cr�me de la cr�me of society e.g. Aristocracy or also named the "blue bloods". These members are usually the wealthiest in the UK; who have inherited their money and position. According to Scott (1991) the upper class maintains their "ruling" position through part taking in the Old Boy Network. ...read more.

Factors like this have caused the boundaries between classes to become more blurred. Savage et al (1992) investigated the different types of middle class lifestyle and identities. Finally, the working class as the UK is no longer dominated by manual labour (e.g. Heavy industries and factories); the traditional working class is being replaced by a high-tech non-manual worker (who still receives a small income, in comparison to the middle and upper classes). From the specific changes that have occurred to each of the individual social classes; sociologist have been able to summarise a number of explanations for this shift in the UK's class formation. First is the theory of Polarisation, this is the process whereby indistinct groups become clearly separated. It indicates that society is dispersed amongst many different groups and individuals. This is mainly associated with Marxist and Neo-Marxist; the Marxist theory is based on the fundamental importance of economic processes in class-based inequalities and was based on the writings of Karl Marx. While the Neo-Marxist theory is based upon the Marxist theory but take into account not only economic factors, but cultural and social ones as well and relate them to contemporary patterns and trends of social inequalities. In terms of polarisation, Marx believed that certain aspects in the natural development of a capitalist economy will lead to its downfall. ...read more.

Davis and Moore (1945) (functionalists) argued that unequal social and economic rewards were an "unconsciously evolved device" by which societies ensured that talented individuals were supplied with motivation to undertake training which would guarantee that important social roles were properly fulfilled. The last hypothesis used to explain the changes in class is that class is irrelevant to modern society. This view clarifies that class divisions are not useful or applicable descriptions in a contemporary society with so many different ways of identifying ourselves and others being used. Postmodernist writers Pakulski and Waters (1996) in the "The reshaping and dissolution of social class in advanced society", argued that class is "dead", because they believe that we live in an "individualised" society. This is where people no longer identify themselves in terms of their social class. This was caused by significant changes e.g. globalisation, which means class divisions are now status division. The incensement in consumerism means that people are now able to buy the image they want to portray. This means that because class is based mainly on a person's occupation (which affects income) people are no able to buy go that would be usually restricted to certain class. This give they analogy that when people identify themselves in terms of class; there is no a sort of "pick'n'mix" approach towards it - people can buy the identities they want through consumption rather then basing it on class. ?? ?? ?? ?? ...read more.

This is a tricky essay as it asks you to outline the changes to the class structure, and then explain them, and then assess each explanation. The last of these areas is least well addressed as there could be more assessment of each explanation whereas at present they sit rather separately to each other. The candidate has done really well to cover so much material, and use perspectives, concepts and theory. Finally, perhaps the candidate needs to address the growth of a perceived 'underclass' and the debate surrounding their emergence (real or imagined)