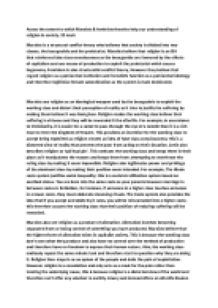 Assess the extent to which Marxists &amp; Feminist theories help our understanding of religion in society

﻿Assess the extent to which Marxists & feminists theories help our understanding of religion in society. 33 mark Marxists is a structural conflict theory who believes that society is divided into two classes, the bourgeoisie and the proletariat. Marxists believe that religion is an ISA that reinforces false class consciousness as the bourgeoisie are favoured by the effects of capitalism and use means of production to exploit the proletariat which causes hegemony. Feminism is also structuralist conflict theory, However they believe that regard religion as a patriarchal institution and its beliefs function as a patriarchal ideology and therefore legitimise female subordination as the system is male dominated. Marxists see religion as an ideological weapon used by the bourgeoisie to exploit the working class and distort their perception of reality as it tries to justify the suffering by making them believe it was God-given. Religion makes the working class believe their suffering is virtuous and they will be rewarded it the afterlife. For example, in accordance to Christianity, it is easier for a camel to pass through the eye of a needle than it is a rich man to enter the kingdom of Heaven. ...read more.

However this view is rejected by Althusser as he believes the concept of alienation is unscientific as human beings have a ?true self?. Marxists show how religion can be viewed as a tool of oppression that?s masks exploitation and creates false class consciousness. However, he ignores positives functions that religion provides such as the psychological adjustment to misfortune, which Neo-Marxists see as assistance rather than a burden. However Marxist Feminist Simone de Beauvoir believes religion reinforces the needs of capitalism when therefore reiterates the role of a housewife for women. She believes that religion cushions the effects of capitalism by representing women in mother and carer roles. For example the Church provides mother and toddler groups to help socialise their children, however this emphasises gender roles within society that women should be the child bearer and take up any jobs involved with childcare, this idea is strengthened further by the Pope as in the year of Madonna he said all women should not work. Radical feminists believe religion reinforces patriarchy through legitimating male authority, power and control. They believe that religious organisations tend to be male dominated despite the fact that women participate more in these organisations. ...read more.

For example Muslim women were the hijab, although this is seen as a form of oppression to some feminists, to the wearer it may symbolise resistance to oppression and liberation that enables them to enter the public sphere without losing their culture and history. Armstrong also argues that women have not always been subordinate to men in religion and that early religions placed women at the centre. However from about 4000 years ago, the rise of monotheistic religions saw the forming of a single, all powerful male God and prophets such as Jehovah and Abraham. This view is also supported by El Saadawi as she argues that religion is not the direct cause of the subordination of women and that it is a result of patriarchal forms of society coming into existence in the last few thousand years. For example, men reinterpreted religious beliefs in ways that favoured patriarchy and therefore religion now oppresses women. Marxism and Feminism are conflict perspectives, however they both highlight the ideological functions of religion differently. Marxists see religion as dulling the pain of false class consciousness and also as a form of ideology that is a response to alienation whereas feminists see religion as an instrument of patriarchy. This is a set of beliefs and practices responsible for women?s subordination. However is argued that religion is not always patriarchal. ...read more.