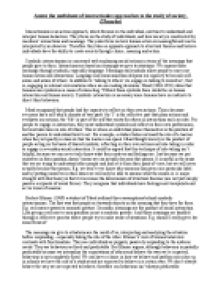 Assess the usefulness of interactionist approaches to the study of society

﻿Assess the usefulness of interactionist approaches to the study of society. (33marks) Interactionism is an action approach, which focuses on the individual, and tries to understand and interpret human behaviour. They focus on the study of individuals, and how society is constructed by members? interactions and meanings. They also focus on how human action is meaningful and can be interpreted by an observer. Therefore they take an opposite approach to structural theories and believe individuals have the ability to create society through choice, meaning and action. Symbolic interactionism is concerned with explaining social actions in terms of the meanings that people give to them. Interactions are based on meanings we give to situations. We express these meanings through symbols, especially language. Meanings and symbols allow people to carry out human action and interactions. Language and communication deepens our capacity to become self-aware and aware of others. In addition to ?talking to others? we engage in talking to ourselves?, that is, engaging in internal conversations when we are making decisions. Mead (1863-1931) states that humans use symbols as a mean of interacting. Without these symbols there would be no human interaction and human society. ...read more.

E.g. a student labelled troublesome will be able to see himself in the eyes of the teacher. They will acknowledge that the teacher sees them as troublesome and that is the reason why they are treated harshly. Labelling theorists such as Becker demonstrate that some labels such as ?mentally ill? or ?underachiever? profoundly affect how individuals see themselves, how others perceive them and how they behave in the future. However, the labelling theory has been criticized, as it fails to explain where labels actually originate from. It has also been accused of determinism. The way we act and identify is shaped by the way people label us. It states we act according to labels and whatever people say about us becomes true. However this is not always the case. We don?t always have to accept these labels. We can reject them, or pretend to accept the label by acting according to the label that is given to us, and fooling those who gave us that label. Another criticism is that although it can explain the patterns of groups, such as the negative labelling of some groups in education, it does not explain the origins of labels and meanings in a wider setting of inequality. ...read more.

They tend to think all action is meaningful. Traditional action is performed unconsciously or routinely ? a habit, and has little meaning for actors. If it doesn?t ?mean anything? interactionism lacks the means to explain it; because they state everything has a meaning. The approach concerns itself with common-sense aspects of interaction. Although it can explain the patterns of groups, such as negative labelling of some groups in education, it does not explain the origins of labels and meanings in a wider setting of inequality. Overall, interactionism largely avoids determinism of structuralist theories such as functionalism. Although it can explain micro interpersonal disruptions, it does not account for macro conflicts such as wider patterns of class, gender, ethnicity, age and regional inequalities. Interactionists provide a useful insight into the workings of society but the theory is ideologically driven. Therefore, the theory is reductionist as it fails to take into account competing theoretical ideas. Postmodernists are critical of the interactionist meta-narrative as they claim to have a ?totalising?, (all encompassing), theory of society. Postmodernists maintain that rival narratives should be considered for a full account of social life. As a whole interactionism is regarded as a voluntaristic theory that emphasises on the freewill and choice we have in how we act. ...read more.