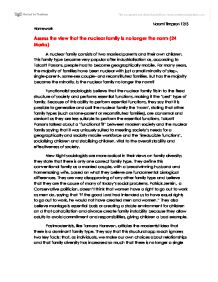 Assess the view that the nuclear family is no longer the norm (24 Marks) A nuclear family consists of two married parents and their own children. This family type became very popular after industrialisation as, according to Talcott Parsons, people had to become geographically mobile. For many years, the majority of families have been nuclear with just a small minority of step-, single-parent-, same-sex couple- and reconstituted families. But has the majority become the minority. Is the nuclear family no longer the norm? Functionalist sociologists believe that the nuclear family fits in to the fixed structure of society and performs essential functions, making it the 'best' type of family. Because of this ability to perform essential functions, they say that it is possible to generalize and call the nuclear family the 'norm', stating that other family types (such as lone-parent or reconstituted families), are abnormal and deviant as they are less suitable to perform the essential functions. Talcott Parsons talked about a 'functional fit' between modern society and the nuclear family saying that it was uniquely suited to meeting society's needs for a geographically and socially mobile workforce and the 'irreducible functions', socialising children and stabilising children, vital to the overall stability and effectiveness of society. New Right sociologists are more radical in their views on family diversity; they state that there is only one correct family type. ...read more.

own diverse family lives Another Postmodernist David Cheal, says that we no longer live in a 'modern world' with functional structures such as the nuclear family, and that society has now entered into a chaotic postmodern stage where people have more choice about their relationships and lifestyles and therefore there is no longer a single 'normal' family type, but many different dominant types. He believed that increased diversity gives people much more freedom to plan their own life course (e.g. choosing to live in a single-person-household or part of a gay/lesbian partnership) but also a greater risk of instability (divorce leading to single-parent or reconstituted families). This thought is shared by Anthony Giddens who believes that changes in morals have left couples free to define their relationship themselves rather than having to follow laws and traditions. He has labelled this a 'pure relationship' where couples may not necessarily marry but stay together (maybe cohabiting) because of love, happiness or sexual attraction. But he also believe that this new dominant family type is unstable as each partner can end the relationship quite easily, leading to increased risk of family breakdown. Ulrick Beck says that we live in a 'risk society' where people have more choice because tradition has less influence on the ways people act in society. In the past, people were expected to get married and, once married, assume their roles (men as financial supporters and women as housewives and mothers). ...read more.

Although he recognises the increase in family diversity, he thinks it is both positive and insignificant. He believes that the only significant change is from a conventional family (in which the husband is the breadwinner and the wife a homemaker) to what he calls a 'neo-conventional family' where both spouses go out to work. He says that the nuclear family is still the ideal which people aspire to. He says that many people currently living in single-person households (divorcees, widows or young unmarried people) were either part of a nuclear family before or will be in the future. Like functionalists, he sees the nuclear family as still dominant but identifies a change to the neo-conventional family. We can see, from Item B, that Somerville also believed the changes were irrelevant. He said that the apparent diversity of family life is based on just one snapshot in time. If you take a life-cycle approach you will discover that most people live in a conventional nuclear family at some point in their lives. In conclusion, it is clear that the nuclear family is no longer the norm in society. Although it is still prevalent in society today and many people aspire to be a part of a nuclear family, for many it is becoming a unrealistic or undesirable family structure, so an increasing number of people are choosing to live in different family types which meet their own specific needs. ?? ?? ?? ?? Naomi Timpson 12/5 Homework ...read more.