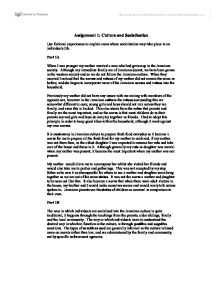 Assignment 1: Culture and Socialisation Use fictional experiences to explain areas where socialisation may take place in an individuals life. Part 1A When I was younger my mother married a man who had grown up in the Jamaican society. Although my immediate family are of Jamaican decent, we have been grown in the western society and so we do not follow the Jamaican culture. When they married I noticed that the norms and values of my mother did not remain the same as before, and she began to incorporate more of the Jamaican norms and values into the household. Previously my mother did not have any issues with me mixing with members of the opposite sex, however in the Jamaican culture the values surrounding this are somewhat different to ours; young girls and boys should not mix unless they are family, and even this is limited. This also stems from the value that parents and family are the most important, and so the norm is that most children do as their parents say and girls and boys do not play together as friends. I had to adopt this principle in order to keep good vibes within the household, although it went against my own norms. It is customary in Jamaican culture to prepare fresh food everyday so it became a norm for me to prepare all the fresh food for my ...read more.

In some instances the child may not want to complete household tasks and, in this instance, the negative sanctions are used. These can vary from being shouted at, to being grounded. In the case of cooking, as mentioned, many daughters see it as a positive sanction to be asked to cook. Also to be given time to spend doing activities of your own choice is a positive sanction for good behaviour. Positive sanctions also come in the form of material gifts; these same gifts can be taken away as a negative sanction. The negative sanctions usually only occur in the case of bad behaviour, whether that be in the eyes of your family or members of the local community. Part 2A My first job, when I finished 6th form, was working as a cashier at Natwest Bank. It was very unusual for me as the norms were very different to those that I was used to following in 6th form. The values surrounding the banking environment were very formal. Ensuring that thet customers had an efficient, secure, banking service was a core value; it was a norm for all staff to follow the necessary security procedures, e.g. checking photo I.D. Having a smart appearance was also a value of Natwest, so the expected norm was to attend work in your designated uniform. ...read more.

The sanctions can vary between formal and informal, they usually begin with the latter. If, for instance, a member of staff is late, other members of staff would use disappointed glances, or sarcastic comments to negatively sanction the employee. The employee then, hopefully, is not late again. If it is a reoccurring problem then the sanction can become formal in the form of a verbal or written warning. In the banking environment there are specific procedures that have to be followed when a person goes against the norms. The extent of the misconduct determines the type of sanction. For instance, in the case of theft, there would be no informal sanction, this would go straight to a formal negative sanction that could result in dismissal. Dismissal is the worst formal negative sanction that can be administered, and this is the sanction feared most by staff and so is avoided. Positive sanctions take the form of promotions, or recognition at staff meetings. Sometimes there are actual gifts as positive sanctions for a good days work. In terms of targets, if they are met, then the bank will give a formal positive sanction in the form of a bonus included with your monthly pay. This is the positive sanction that everyone strives for, not only for the extra money, but because it shows that you are competent in your job. ?? ?? ?? ?? ...read more.