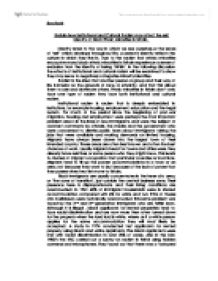 Explain how Institutional and Cultural Racism may affect the self Identity of Black Ethnic Minorities in Britain.

Explain how Institutional and Cultural Racism may affect the self Identity of Black Ethnic Minorities in Britain. Identity refers to the way in which we see ourselves-or the sense of 'self' which develops throughout life. A person's identity reflects the culture in which they live in. Due to the racism that ethnic minorities encounter many black ethnic minorities in Britain experience a sense of exclusion from the identity of being 'British'. In the following discussion the effects of institutional and cultural racism will be examined to show they may serve to negatively categorise minority identities. Racism is the idea that another person or group and their way of life is inferior on the grounds of race or ethnicity, and that this allows them to rule and dominate others. Ethnic minorities in Britain don't only face one type of racism they face both institutional and cultural racism. Institutional racism is racism that is deeply embedded in institutions, for example housing, employment, education and the legal system. For much of the period since the beginning of post-war migration, housing and employment were perhaps the most important problem area s in the lives of new immigrants, and were the subject of constant comments by officials, the media and the government who were concerned to dismiss public fears about immigrants taking the jobs that were available and making demands on limited housing. ...read more.

Thankfully these images have disappeared from modern television and films. However the media still tends to associate black people with physical rather then intellectual activities and to view them in stereotypical ways. Black people are portrayed in the media in several different negative ways. These are some of them: As Criminals.In1991 Van Dijak conducted a content analysis of tens and thousands of news items across the world over several decades. He found that black crime and violence are one of the most frequent issues in ethnic coverage in newspapers. Ethnic minorities, particularly Afro-Caribbean's, tend to be portrayed, especially in the tabloid press, e.g. The sun, Mail, Express etc, as criminals or members of organised criminal gangs. Also he found that the word 'black' is often used as a prefix if an offender is a member of an ethnic minority e.g. 'black youth'. The word 'white' is hardly ever used in the same way. The fact of the matter is that a black person is 36 times more likely to be the victim of a violent attack then a white person. Ethnic minorities are also seen as a threat to Britain and the white population. Tabloid papers are prone to stress about the numbers of ethnic minorities in Britain and how Britain Is becoming 'swamped' with blacks. ...read more.

The British crime survey is a national survey based on a reprosentive sample of the population. It asks people whether they have been the victim of particular crimes during the previous year. It is estimated that in 1992 130 000 crimes involving some racial elements were committed. This includes 32 250 racially motivated assaults. A large majority of the victims were from ethnic minority groups. Of the 130 000 estimated crimes fewer then 8 000 were reported to the police, However the level of reporting is increasing from 28 in 1988 to 577 in 1993 to the Greater Manchester Police, and the level reported to the press is also increasing. Theses racial incidents tend not to be reported to the police for a number of reasons. The victims are usually scared to report in case the attackers find out and attack again. Also when the incidents are reported the police don't tend to take them as seriously as they should so nothing much is done about them, and even if something is done its very hard to catch them as they usually attack in groups. As well as this the majority of the police force is white, and the police force is full of institutional racism putting ethnic minorities off reporting. Clearly, it is understandable why many black ethnic minorities feel uncomfortable with a 'British Identity' because the majority of white people do not see them as British. Sara Smith ...read more.