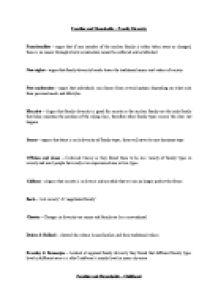 Families and Households. Notes on Diversity Childhood and Industrialisation.

﻿Families and Households ? Family Diversity Functionalists ? argue that if any member of the nuclear family is either taken away or changed, there is no means through which socialisation cannot be enforced and established New rights ? argue that family diversity breaks down the traditional norms and values of society Post modernists ? argue that individuals can choose from several options depending on what suits their personal needs and lifestyles. Marxists ? Argue that family diversity is good for society as the nuclear family are the only family that helps maintain the position of the ruling class, therefore other family types ensure this does not happen. Stacey ? argues that there is such diversity of family types, there will never be one dominant type O?Brien and Jones ? Criticised Stacey as they found there to be less variety of family types in society and most people have only ever experienced one or two types. Giddens ? Argues that society is so diverse and unstable that we can no longer predict the future. Beck ? ?risk society? & ?negotiated family? Chester ? Changes in diversity are minor and family are less conventional. Driver & Ballard ? showed the culture Asian families and their traditional values. Eversley & Bonnerjea ? Looked at regional family diversity they found that different family types lived in different areas i.e. afro Caribbean?s mainly lived in inner city areas. Families and Households ? Childhood Aries 1. Argued that in medieval times after children were weaned they were regarded as adults 2. ...read more.

Freeley ? Argues the family is an ideological controlling device where the wife is taught to accept her subordinate position in society. Women are taught to accept the authority of their husband Delphy & Leonard ? Studied w/c areas and found that work women do in family are the main cause of their oppression. Argued women kept their husband ?sweet? because they depended on them financially Greer ? Argued that marriage is set up to please men called this the ?con of marriage? & the role of the mother is the most undervalued job in society. Somerville ? Argues that radical feminists fail to acknowledge the changes and progress made over the years i.e. sex discrimination act, divorce reform act etc. Families and Households ? State Policy The welfare state ? Was set up by the Labour party in 1948 to support families? through benefits, public housing, health care and family allowances. Conservative party (1979) - Argued the government had become a ?nanny state? where the state has too much control over individuals? lives ? believe society should be free for state interference. Means Testing ? Benefits are given to those whose income is below a specifics figure Margret Thatcher ? Describe the nuclear family as being the ?building block of society? Labour Party ? They were less ideological but prefer the nuclear family ? introduced civil partnerships and invented laws that have helped cohabiting couples to adopt. Marxists ? Marxists argue that state policies are designed to protect capitalism. ...read more.

society Week et al ? It?s easier to have a relationship with same sex as they offer more support for each other Wilmot and Young ? Came up with the terms ?joint conjugal roles? segregated conjugal roles? and ?symmetrical family Families and Households ? Industrialisation Industrialisation ? Shift between agriculture to factory production Urbanisation ? Shift from country side to towns and cities Geographical Mobility ? This is where after industrial revolution families started moving around. Anne Oakley ? Cottage industry Parsons ? Attempted to trace development of pre industrial society found extended family benefited from free labour Zaretsky 1. Development of factories destroyed the family as a unit of production. Family life and work were separated under capitalism. 2. There was a sense of belonging, purpose & control when family was extended. Wilmot & Young 1. Movement towards nuclear family was not as sudden as Parsons suggested. 2. Studied an area in Bethnal Green and found that many working classes still depended on their relatives for social and financial support thus creating extended kinship networks. Anderson ? Studied the textiles industry in Preston and found that extended family became more common during industrialisation as the w/c needed as many members working as possible Laslett ? Studied parish records and found that 10% of families were extended before industrialisation because of health care sanitation people usually never lived as long as they do now so grandparents probably died. Fletcher ? Family has retained its functions they have just become more increased in detail and importance and institutions have not take over the role of the family. ...read more.