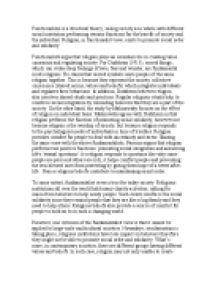 Functionalist view about the role of religion in today society

﻿Functionalism is a structural theory, seeing society as a whole with different social institution performing various functions for the benefit of society and the individual. Religion, in functionalist view, exists to promote social order and solidarity. Functionalists argue that religion plays an essential role in creating value consensus and regulating society. For Durkheim (1915), sacred things, which can evoke deep feelings of awe, fear and wonder, are fundamental in all religions. He claims that sacred symbols unite people of the same religion together. This is because they represent the society collective conscience (shared norms, values and beliefs) which integrates individuals and regulates their behaviour. In addition, Durkheim believes religion also involves shared rituals and practices. Regular religious rituals help to reinforce social integration by reminding believers that they are a part of the society. On the other hand, the study by Malinowsky focuses on the effect of religion on individual basis. ...read more.

Religious beliefs also provide a source of comfort for people to hold on to in such a changing world. However, one criticism of the fundamentalist view is that it cannot be applied to large-scale multicultural societies. Nowadays, secularisation is taking place, religious institutions have less impact on believers therefore they might not be able to promote social order and solidarity. What?s more, in contemporary societies, there are different groups having different values and beliefs. In such case, religion may not only unable to create social solidarity but also be a source of potential conflicts between people holding different beliefs. For example, the conflict between Palestine and Israel is rooted from religion. The 9/11 is also an instance of how variance of religious beliefs can cause such a disaster. In addition, conflicts can arise within faiths as well. The rivalry between Catholics and Protestants in Northern Ireland and the war between Sunni and Shiite Muslim in Iraq are two indisputable example of such intra-religion discord. ...read more.

The country leaders play the central role in the religion and are often respected and even worshipped like religion leaders ( e.g Lincoln ). The event of 9/11 is viewed by sociologists as an attack on Americanism. However, it reinforced the collective conscience and social solidarity in the US at that time and provoked a great sense of patriotism. Bellah?s view is shared by Nanda (2008) in the study called ?God and Globalisation?. Nanda claims that Hinduism has become inter-linked with Indian Nationalism. Hinduism integrates individuals in India and influences government policies (e.g) ?Hindu Science? is a complulsory subject in Indian schools. The concept of civil religion can still be applied to contemporary societies whereby different cultures exist at the same time. However, in many societies which are also multicultural (e.g) the UK but civil religion doesn?t seem to take any form. In conclusion, Functionalism provides a useful definition of religion as well as its role in the society. However, some functions mentioned by Functionalists aren?t very appropriate in the context of diverse contemporary society. ...read more.