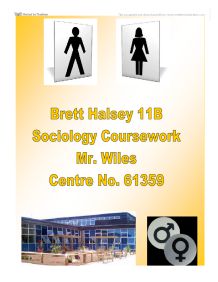 Introduction I have decided to study whether boys are more disruptive, in the classroom, than girls. This topic appeals to me because I am still in full time education and find it interesting to analyse the behavioural differences between the two genders and whether this is reflective of recent GCSE results. During my school years experience, I have found males to be more disruptive: calling out; shouting; hitting and physical violence. I think that females are more likely to disrupt the lesson by talking to each other. I would like to study this further; hence my reasons for choosing this topic. Some of the questions I have in my mind at the beginning of my enquiry are whether teaching is biased towards female education. If this is so then this might suggest a reason for high levels of achievement amongst females, in comparison to males. I believe that females out-perform males in schools because they are either more ambitious or more mature. In my opinion, males tend to be less focused and easily distracted, perhaps by females, or just by a lack of interest in the topic at hand. I am going to set about researching this topic by collecting information from questionnaires, interviews and observations. I can use the National Office of Statistics website: as a form of secondary information: http://www.statistics.gov.uk/statbase/Product.asp?vlnk=5748 (Social Trends 35 full report & data). I hope to compare this data with some of my own research to see whether it is representative of the national average, if not I will try to identify why not and the reasons behind this. I believe that my primary research may not be representative of the entire population because I might not have time to collect large amounts of data. In addition to this, the classes that I observe may not typical of the population, therefore affecting my results. Background Information Percentage of entrants achieving grade A*-C Males Females All Mathematics 51 53 52 English 54 69 62 English Literature2 58 73 ...read more.

and randomly to classes in year 11. These questionnaires revealed that, females tend to prefer school, in comparison to males. This is evident from 'Graph 1 - How Much Do You Like School?' This graph shows a clear pattern, demonstrating that more males hate school and more females like school. This negative attitude towards education by males, might suggest a reason why, on overage, they receive lower GCSE qualifications when compared to females. However, this information may not be representative of the entire population as the attitudes and behaviour towards education may differ at Minster College than other schools in the United Kingdom. In response to the 'How well behaved would you say you are in a classroom' question (Graph 2), the male and female results were fairy similar. Despite their similarity, males still proved to behave more 'badly' than females. This information may not be reliable because it was dependent on the respondent, i.e. whether they were truthful or not. In order to eliminate this area of uncertainty, I carried out several observations as well, which will hopefully create a true picture of the situation, which might either agree or disagree with these responses from my questionnaires. On average, females stated that education was more important to them, in comparison to males (Graph 3). Although a lot of males agreed that education was important to them, some also commented that it was not very important, and some that it was not at all important to them. These results lowered the average, causing females to value education higher than males. These results are reflective of the national average, i.e. GCSE results. As a consequence of this it might be that females value education higher than males, causing them to gain better qualifications, on average. I created a graph of my findings from my observations. I used tally sheets throughout more observations, which lasted approximately an hour. ...read more.

In this sense, the results might not be valid as the question might be misunderstood or misinterpreted by the respondent. Furthermore, I could include the question: "How many hours do you spend on homework a week?" The possible answers would be: 1 hour, 2 hours, 3 hours, 4 hours, 5 hours, or 6 hours+. This would provide insight to whether females spend more time working or put a greater amount of effort into school work than males. I could then compare this to the source Harris et al. 1993 mentioned in my conclusion. If I had more time when completing my project, I would interview a greater number of staff about their views on gender behaviour. This would prove my results more valid, and I would gain a greater in-depth knowledge about teachers' views on gender achievement and disruptive behaviour. Likewise, I would increase my number of observations which would create a more valid picture of the situation. I could also take part in participation observations (covert) as well as non-participation observations. In this sense, I could compare the two and see if participation observations create difference results, which might be more valid. When observing classes I noted the number of males and females, as this would affect my results. After taking all of my observations into consideration, the level of males to females was 29 - 47. As the lessons I chose to observe should have contained fairly equal amounts of males and females (although these classes might not have been representative of the whole school), this made me realise that attendance might be another factor linking gender with achievement. As an additional study I could research whether females, on average, have a higher attendance than males, which might suggest why they tend to outperform males when it comes to examination results. * Sociology for GCSE and Modern Studies by Pauline Wilson and Allan Kidd (Harris et al. 1993). * http://www.statistics.gov.uk/statbase/Product.asp?vlnk=5748 * http://www.statistics.gov.uk/cci/nugget.asp?id=1653 * Doing Social Research - A Guide To Coursework ...read more.