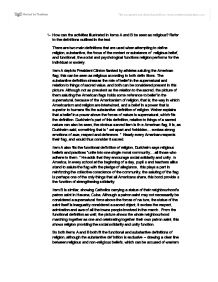 How can the activities illustrated in Items A and B be seen as religious? Item A depicts President Clinton flanked by athletes saluting the American flag, Item B is similar, showing Catholics carrying a statue of their neighbourhoods patron saint in Ha

1- How can the activities illustrated in Items A and B be seen as religious? Refer to the definitions outlined in the text. There are two main definitions that are used when attempting to define religion, substantive, the focus of the content or substance of religious belief, and functional, the social and psychological functions religion performs for the individual or society. Item A depicts President Clinton flanked by athletes saluting the American flag; this can be seen as religious according to both definitions. The substantive definition stresses the role of belief in the supernatural and relation to things of sacred value, and both can be considered present in this picture. Although not as prevalent as the relation to the sacred, the picture of them saluting the American flags holds some reference to belief in the supernatural, because of the Americanism of religion, that is, the way in which Americanism and religion are intertwined, and a belief in a power that is superior to humans fits the substantive definition of religion. ...read more.

the saint itself is inarguably considered a sacred object, it evokes the respect, admiration and awe of all the towns people involved in the march. From the functional definition as well, the picture shows the whole neighbourhood marching together as one and celebrating together their own patron saint, this shows religion providing the social solidarity and unity function. So both items A and B both fit the functional and substantive definitions of religion, although the substantive definition is exclusive - drawing a clear line between religious and non-religious beliefs, which can be accused of western bias, this does not show, and the inclusive functional definition which includes a wide range of beliefs also applies here. 2. Briefly criticise the view that all of the activities pictures above should be seen as religious. According to Durkheim's part of the substantive definition of religion about sacred objects or people, every one of the featured pictures fits into this definition, the pictures feature many arguably sacred objects or themes; the American flag, statue of a saint, a clairvoyant, the wiccan five point star, remembrance memorial and the English flag, because each of these can ...read more.

The functional definition of religion, which stresses the way in which religion can provide social solidarity and unity and a feeling of collective consciousness, are definitely prevalent in most of the pictures, but the clairvoyant and white witch ceremony could possibly promote feelings of controversy and anger, many respond negatively to self-proclaimed clairvoyant as they arguably idolize themselves which is unchristian. The majority of these pictures though, at least to the groups specifically shown in the pictures, bring about a sense of solidarity and togetherness, functions that the religion and its ceremonies or processes has brought about, so it fits the definition. The problem with these definitions, as can be seen from the fact that in some way or another, all the of the pictures can be loosely defined as religious, is that perhaps the definitions are too universal, in order to study religion and beliefs, one must be able to differentiate between religious and non-religious groups, but if in some respect and depending on context, any group can be considered religious, involving sacred objects or supernatural factors, then it is difficult to draw contrast between the two groups. ...read more.