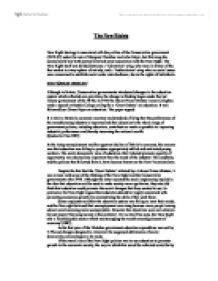 New Right ideology is associated with the politics of the Conservative government (1979-97) under the rule of Margaret Thatcher and John Major,

The New Rights New Right ideology is associated with the politics of the Conservative government (1979-97) under the rule of Margaret Thatcher and John Major, but following the second world war both parties have had some association with the New Right. The New Right itself was divided between a 'Libertarian' wing, who were in favour of the free market in every sphere of activity, and a 'Authoritarian' wing who on social issues were concerned to establish social order and obedience, above the rights of individuals. THE 'GREAT DEBATE' Although in Britain, Conservative governments introduced changes to the education system which reflected new priorities, the change in thinking began under the last Labour government of the 1970s. In 1976 the labour Prime Minister James Callaghan made a speech at Ruskin Collage calling for a 'Great Debate' on education. ...read more.

Although the latter rejected the social engineering implied in the idea that education cold be used to make society more egalitarian, they also did think that education could promote the social changes that they wanted to see. In particular, the New Right argued that education should be largely concerned with promoting economic growth, by concentrating the skills of the work force. Some employers said that the education system was failing to meet their needs, and the New right believed that unemployment was rising because more people leaving school were becoming more unemployable. However the objectives were not achieves by just simply 'throwing money at the problem'. For as Dan Finn says, the New Right saw a 'bloated public sector which was strangling the wealth-creating element of economy'(1987). ...read more.

* To make higher and further education more accessible, and more responsive to the needs of the economy. * And lastly to achieve the best possible return from the resources invested in the education service. An important part of the New Right philosophy- and one which has exercised a strong influence on educational reforms- has been its hostility to state bureaucracies. New Right generally holds the thinking of state-run institutes inefficient. Although the New Right and the Conservative government of the 1980s and 1990s supported radical changes in the educational system , and sought to introduce a more business orientated curriculum, but in other areas they supported the teaching of very traditional subject. According to Stephen ball (1990) the proposed the teaching of subjects such as Greek, and Latin. They opposed social subjects such as science, peace studies, and personal, social and health education. They were also hostile against multi cultural education. ...read more.