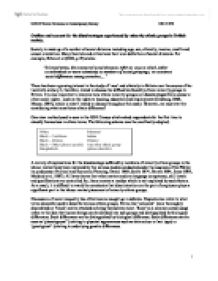 Outline and account for the disadvantages experienced by minority ethnic groups in British society.

Outline and account for the disadvantages experienced by minority ethnic groups in British society. Society is made up of a number of social divisions including age, sex, ethnicity, income, wealth and sexual orientation. Many theorists and critics have their own definition of social divisions. For example, Bilton et al (2002, p.70) states: "In broad terms, the concept of social divisions refers to ways in which, either as individuals or more commonly as members of social groupings, we construct social differences among ourselves...." There has been a growing interest in the study of 'race' and ethnicity in Britain over the course of the twentieth century. I, therefore, intend to discuss the difficulties faced by ethnic minority groups in Britain. It is also important to examine how ethnic minority groups are disadvantaged from access to other social rights - such as the rights to housing, education and employment (Ginsburg, 1998; Macey, 1995), which is what I intend to discuss throughout this essay. However, we must start by considering what constitutes ethnic difference? One clear method used is seen in the 1991 Census which asked respondents for the first time to classify themselves in ethnic terms. The following scheme was the one finally adopted: A variety of explanations for the disadvantage suffered by members of minority ethnic groups in the labour market have been reviewed by the various studies conducted under the auspices of the PSI (or its predecessor Political and Economic Planning; Daniel 1968; Smith 1974; Brown 1984; Jones 1993; Modood et al. ...read more.

According to Owen (1994), the health of old Chinese people deteriorates much faster than the same aged people in mainstream society. Song (1997) discovered that the self image of some young Chinese is affected by their involuntary participation in family based take-away businesses. Social exclusion may also be caused by the existence of psychological and institutional barriers which block people from participating actively in society. According to the 1991 UK census, 70 per cent of Chinese men and 50 per cent of Chinese women were defined and economically active. Of these, 88 per cent of men and 90 per cent of women were in paid employment (Cheng, 1996); their unemployment rates were the lowest when compared to other ethnic groups (Modood et al., 1997). More over, the average earnings of Chinese families were higher than any other group, including the white group (Berthoud, 1998). Furthermore, the Chinese were the highest qualified ethnic group in Britain, with 26 per cent having university degrees or professional qualifications in 1997, suggesting that many of them have had high employability (Chan, 1999). Recent studies argue that many Chinese people were unwilling to contact the police and were unwilling to respond to the 1991 UK Census because of their traditional habit of having deep suspicion of authority (Victim Support, 1997). This therefore disadvantages them as they are unable to use the facilities to their advantage. ...read more.

In England, as well as the United States, some evidence suggests that Black women are achieving better than white women and even better than some white men (Farley and Allen, 1989: O'Hare et al., 1991L Mirza, 1992). Sports in general and certain sports like athletics, boxing, American football and basketball, reflect these impressions of Black success. In 1983 Blacks won 14 of the 33 medals available in running races at the World Championships; in 1987 hey won 19 (Burfoot, 1992; 89). Key successes in the 1980's included: in athletics those of Linford Christies, Jackie Joyner-Turner, Carl Lewis and Tessa Sanerson; In basketball Michael Jordan and Magic Johnson; in boxing Larry Holmes, Mike Tyson, Frank Bruno and Chris Eubank. Thus, successes in these areas tend to suggest the end of racialised barriers and the advent of a truly meritocratic society. (Small, 1994). Though, it is argued that they are channeled and encouraged into this area. In conclusion, from the above discussion, it is indisputable that ethnic minorities experience a number of disadvantages. Though, albeit, some of these disadvantages are not helped by themselves such as taking an active approach to learn the English language and other reasons beyond their control. However, it is increasingly evident that these disadvantages are being turned on their heads with a number of successes by individual ethnic minorities. Though, I believe, improvements have been made and society is moving on in the right direction, there is yet still room for development. ...read more.