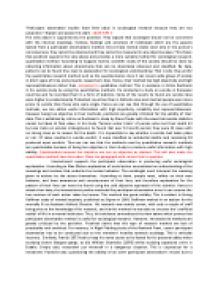 Participant observation studies have little value in sociological research because they are too subjective. Explain and assess this claim

﻿?Participant observation studies have little value in sociological research because they are too subjective.? Explain and assess this claim. 18/25 72% C The view above is supported by the positivist. They argued that sociologist should not be concerned with the internal meanings, motives, feelings and emotions of individuals which are the aspects looked from a participant observations method. Since these mental states exist only in the person?s consciousness, they cannot be observed and they cannot be measured in any objective ways. This shows that positivist supports the view above and provides a more suitable method for sociological research, quantitative method. According to Auguste Comte, scientific study of the society should be done by collecting information about phenomena that can be objectively observed and classified. By data, patterns can be found thus lead to explanation for sociological understanding. That is why they prefer the quantitative research method such as the questionnaires since it can covers wide group of society in short space of time and prevents researcher?s bias. Hence, their method has high objectivity and high representativeness rather than compared to qualitative method. ...read more.

The sociologist must interpret the meaning given to actions by the actors themselves. According to them, people react, reflect on their own behavior, and have awareness and consciousness of their lives, and therefore explanation for the pattern of their lives can never be found using the cold objective approach of the scientist. Hence to obtain their data, the Interactionist prefers methods like participant observation since it can uncover the true motives of each action taken by human. This method has great validity. This is evident in Erving Goffman study of mental hospitals, published as Stigma in 1968. Goffman worked in an asylum for the mentally ill as Assistant Athletic Director. His research was mainly covert, with only a couple of staff being privy to the knowledge of his research, and via this method he was able to uncover the 'unofficial reality' of life in a mental institution. Thus, this evidence contradicted the view above which proves that participant observation method is useful for sociological research. However, Interactionist methods are greatly criticized by the positivist. ...read more.

it may provide a better understanding of a phenomenon than if one method had been used and thus offers great potential in many instances. In a study of the Unification Church, or Moonies, Eileen Barker used participant observation, questionnaires and in depth interviewing. She claimed this combination methods allowed her to ?see how the movement as a whole was organized and how it influenced the day-to-day actions and interactions of its member?. She tried to test hypotheses formulated from qualitative data using questionnaires. Hence here we can see that through triangulation, a better understanding of the whole situation. This is supported by a study done by Delmont. She used the Flanders Interaction Analysis Categories in her studies of classroom interaction. These allowed her to categorize the different types of interaction and to time them in order to determine differences in the educational experience of the boys and girls. She used qualitative data to explain the reasons for the quantitative relationships she found. Thus it is combining the two methods can really give a more useful information in our study with better objectivity, representativeness, reliability and validity. Give more value to the study. ...read more.