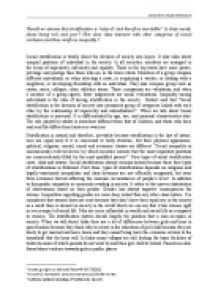 Should we assume that stratification is natural and therefore inevitable? Is class merely about being rich and poor? How does class intersect with other categories of social exclusion and thus reinforce inequality?

﻿Jaivardhan Singh Shekhawat ________________ Should we assume that stratification is ?natural? and therefore inevitable? Is class merely about being rich and poor? How does class intersect with other categories of social exclusion and thus reinforce inequality? Social stratification is totally about the division of society into layers. It also talks about unequal positions of individual in the society. In all societies, members are arranged in the terms of superiority, inferiority and equality. Those in the top strata have more power, privilege and prestige than those who are in the lower strata. Members of a group compare different individuals, as when selecting a mate, or employing a worker, or dealing with a neighbour, or developing friendship with an individual. They also compare group such as castes, races, colleges, cities, athletics teams. These comparison are valuations, and when a member of a group agrees, these judgements are social evaluations. Inequality among individuals is the idea of having stratification in the society. Gisbert said that ?Social stratification is the division of society into permanent group of categories linked with each other by the relationship of superiority and subordination[1]?. When we talk about Social stratification is universal. It is differentiated by age, sex, and personal characteristics also. ...read more.

Marx also believed that economic base of society influences the general character of all other aspects of culture and social structure, such as law, religion, education and government. Approach of Max Weber is analysed on the theory developed by Marx, but modified and more elaborated. Weber says that social stratification is not merely about class, but it is formed by additional two aspects i.e. status and party. He accepted Marx?s view that class is founded on objectively given economic conditions, but Weber saw a greater variety of economic factor as an important in class formation then was recognised by Marx. Weber?s theory refers to difference between social groups in the social honour or the prestige they are accorded by others. Weber also argued that status often varies independently of class division. Weber?s writing on stratification is considered as important because it shows about the dimension of stratification besides class strongly influences people?s lives. Weber pulls attention to the complex interplay of class, status and party as distinct parts of social stratification creating a more flexible basis for observed studies of stratification.[5] No, class is only about being rich and poor. Class is also related to status in the society. Different statuses arises in society as people do different things, engage in different activities and pursue different vocations. ...read more.