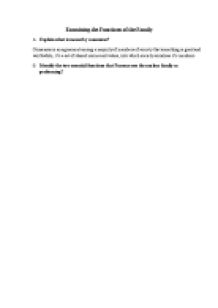 Using material from item A and elsewhere, assess the contribution of functionalism to our understanding of families and households

﻿Examining the Functions of the Family 1. Explain what is meant by consensus? Consensus is an agreement among a majority of members of society that something is good and worthwhile, it?s a set of shared norms and values, into which society socialises it?s members 1. Identify the two essential functions that Parsons sees the nuclear family as performing? Using material from item A and elsewhere, assess the contribution of functionalism to our understanding of families and households? Functionalists believe that society is based on a value consensus; this is a set of shared norms and values into which society socialises its members. This enables society to work harmoniously and meet its needs and goals. Functionalists view society as being made up of a number of sub-systems that are dependent upon each other. These can include the education system, media, religion, and the economy. Just as the human body is dependent upon each of the functions in order to survive, society is dependent on each of the sub-systems. ...read more.

Through hard work people can achieve their status and earn top jobs such as a lawyer. For this reason Parsons argues that the nuclear family is better as in an extended family. The pre-industrial family had many functions; it was a unit of production where the family worked together perhaps on a farm and a unit of consumption, feeding and clothing for its members. It was more self-sufficient than the modern nuclear family. However according to Parsons when the family changed from an extended to a nuclear family in industrial Britain it lost many of its functions. For example the family ceases to become a unit of production. The family had just two irreducible functions these were the primary socialisation of children and the stabilisation of adult personalities. However, not everyone accepts the functionalist view of the family and its role. Marxists and feminists reject its consensus assumptions about who benefits from the family. ...read more.

Feminists argue that Marxists place too much emphasis on class conflict and not enough on the gender inequalities that exist between men and women. Also, Functionalists ignore the real benefits that the family can provide such as mutual support and intimacy. Feminists also take a critical view of the family. They argue that the family oppresses women. They see gender inequality as something that is created by society. Ansley describes women as ?takers of shit? who soak up the frustration of their husbands that they feel because of their exploitation and alienation in the workplace. Marxists feminists see the exploitation of women in the family as linked to the exploitation of the working class. They argue that the family must be abolished at the same time as a socialist revolution replaces capitalism with a classless society. Radical feminists argue that the family and marriage are key institutions in patriarchal society. Men benefit from women?s unpaid domestic labour and from their sexual services, and they dominate women through domestic and sexual violence of the threat of it. ...read more.

A good piece of work examining the functions of the family using Functionalism. The writer clearly understands the theory and the different roles of the family. To improve the work it would be useful to locate the other views of the family in the context of functionalism.
The writing style was very good overall.
4/5