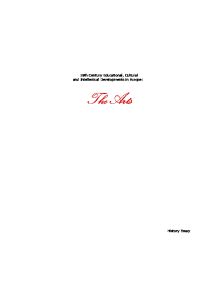 19th Century Educational, Cultural and Intellectual Developments in Europe: The Arts History Essay 19th Century Educational, Cultural and Intellectual Developments in Europe: The Arts The clearest main trends in arts during the 19th century were romanticism and as a reaction to it, realism. In this essay I will go through the main trends in nineteenth century arts, especially the novel, taking my examples mainly from England. The roots of romanticism lay in the European upheavals that begun from the French Revolution and Napoleonic wars and continued after the Congress of Vienna as dissatisfaction and restlessness. The re-assessing of values that woke up along these events reached all branches of intellectual life was named Romanticism. Though Neo-classicism (which was a eighteenth and nineteenth century French art style and movement that originated as a reaction to the Baroque and wanted to renew the ideals of ancient Greek and Roman art) was philosophically opposed to Romanticism (which was basically a reaction against Neo-classicism with its individualistic, beautiful, exotic and emotional ideas), they were the dominant European styles for generations and many artists were affected to a greater or lesser degree by both. Despite of this, Neo-classicism basically died out in the 1880s, when the ideas about courage, sacrifice and love of country were discarded by other ideas, mainly those of realism. Britain was the first country where romanticism flowered fully in poetry and prose. The greatest British romantic writers, Wordsworth and Coleridge were both poets. ...read more.

Narrow-mindedness and superficiality followed. Whereas poetry had been the genre of romanticism, the novel was more important for Victorian age realism, more precisely said the middle-class realistic novel. Also the findings of scientific revolution (among them the Origin of the Species by Charles Darwin, also British) had much to do with realist ideas. Urbanisation in turn affected the description of family life and gender roles. No other British novelist has received greater success than Charles Dickens (1812-1870). Dickens's works are characterised by attacks on social evils, injustice, and hypocrisy. He had also experienced in his youth oppression, when he was forced to end school in early youth and work in a factory. Dickens's career as a writer of fiction started in 1833 when his short stories and essays to appeared in periodical. His Sketches by Boz and The Pickwick Papers were published in 1836. Dickens's good, bad, and comic characters have fascinated generations of readers. Among the long list of Dickens's world-famous works are Oliver Twist (1837-9), Nicholas Nickleby (1838-9), A Christmas Carol (1843), David Copperfield (1849-50), A Tale of Two Cities (1859) and Great Expectations (1860-1). In Victorian age abundant prose, female authors played a remarkable part. The most remarkable of them were probably the Bront� sisters; Charlotte (1816-55), Emily (1818-48) and Anne (1820-49). In their works they described love more truthfully that was common in Victorian age England. In the past 40 years Charlotte Bront�'s reputation has risen rapidly, and feminist criticism has done much to show that she was speaking up for oppressed women of every age. ...read more.

The result was to emphasise the artist's perception of the subject matter as much as the subject itself. Impressionist art is a style in which the artist captures the image of an object as someone would see it if they just caught a glimpse of it. They paint the pictures with a lot of colour and most of their pictures are outdoor scenes. Their pictures are very bright and vibrant. The artists like to capture their images without detail but with bold colours. Some of the greatest impressionist artists were among others Camille Pisarro and Claude Monet. Monet probably as the most famous impressionist was interested especially in portraying the plants in his garden, but also subtle changes in the atmosphere. Symbolism began as a reaction to the literal representation of subjects preferring to create more suggestive and evocative works. It had its roots in literature with poets such as Baudelaire believing ideas and emotions could be conveyed not only through the meaning of words but also in their sound and rhythm. The styles of the Symbolist painters varied considerably, but they shared many of the same themes particularly a fascination with the mystical and the visionary. The erotic, the perverse, death and shamelessness were also regular interests for the Symbolists. The leading figures of the movement included the two French men, Odilon Redon and Paul Gauguin, but Symbolism was not limited to France with other practitioners including the Norwegian Edvard Munch, the Austrian Gustav Klimt and the British Aubrey Beardsley. ...read more.