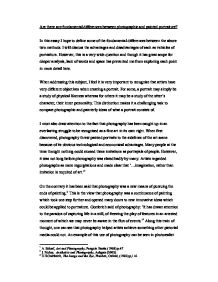 Are there any fundamental differences between photographic and painted portraiture

Are there any fundamental differences between photographic and painted portraiture? In this essay I hope to define some of the fundamental differences between the above two methods. I will discuss the advantages and disadvantages of each as vehicles of portraiture. However, this is a very wide question and though it has great scope for deeper analysis, lack of words and space has prevented me from exploring each point in more detail here. When addressing this subject, I feel it is very important to recognise that artists have very different objectives when creating a portrait. For some, a portrait may simply be a study of physical likeness whereas for others it may be a study of the sitter's character, their inner personality. This distinction makes it a challenging task to compare photographic and painterly ideas of what a portrait consists of. I must also draw attention to the fact that photography has been caught up in an everlasting struggle to be recognised as a fine art in its own right. When first discovered, photography threw painted portraits to the sidelines of the art scene because of its obvious technological and economical advantages. Many people at the time thought nothing could exceed these imitations as portrayals of people. However, it was not long before photography was slated badly by many. Artists regarded photographs as mere regurgitations and made clear that '...imagination, rather than imitation is required of art.'1 On the contrary it has been said that photography was a new means of pursuing the ends of painting.2 This is the view that photography was ...read more.

Due to lack of any conclusive findings in the above paragraphs, the question of what function a portrait must fulfil becomes apparent. West defines: 'A portrait [...] serves magically to freeze time and to extend artificially the life of the represented individual.'7 With this comment brought to attention it appears that photographic portraits are the most technically accurate. The photograph records the sitters face exactly as it was at that precise moment in time, however the painting can often miss tiny details of the face which reveal its age and disposition. The photographic portrait, pre airbrushing and altering, does not omit any blemishes or imperfections. Painted portraits, however, can do this quite easily and the painter had never before had to face this problem of creating an exact likeness. There was nothing preceding photography that was any more visually correct than painting or drawing. For this reason many artists were '...found [...] in a bewildered and aggressive mood,'8 after the invention of photography. Referring back to West's quote above, the use of the word 'artificial' has negative connotations and this view really only covers a certain type of portraiture. Consider a portrait which does not really resemble the sitter but which is more a symbolic representation, for example Francis Bacon's painting of 'Isobel Rawsthorne in a street in Soho.' (1967) Clearly Bacon is not painting what he sees of the woman's physical features but extracting things from her inner-self which are not visible to the eye: perhaps her angst, sorrow, grief and emotional exhaustion. ...read more.

From what has been noted above, it has become evident that no sound comparison can be made between the two techniques. It is probable that many people are of the view that photography is a completely independent art form and exists on an entirely different plain to that of painting. To these people it is highly inappropriate to compare photographs with paintings in the first place. Furthermore, the arguments for and against the two methods seem empty and inconclusive considering that the function of the portrait is extremely variable. They are not always made to be displayed as works of art and often serve a broader function.14 They can act as emblems or reminders of people rather than images of exactly what that person's facial features were like -For example, on our currency. They can act as representations of a certain mood and a certain type of person, or indeed as a mere regurgitation of the sitter. They can also act simply as a way through which the artist can express him/herself. In any case, the different objectives artists strive for make it almost impossible to compare the two techniques. They are not on level ground. To summarise my findings over the course of writing this essay I would have to conclude that there are no fundamental differences between the two art forms but many differing advantages and disadvantages of one over the other and vice versa. Essentially, however, photographs are the most true depictions of ourselves whereas paintings are an imitation or copy of a real thing. ...read more.