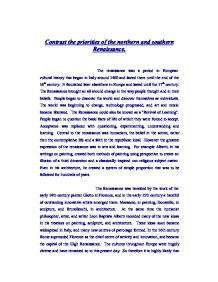 Contrast the priorities of the northern and southern Renaissance.

Contrast the priorities of the northern and southern Renaissance. The renaissance was a period in European cultural history that began in Italy around 1400 and lasted there until the end of the 16th century. It flourished later elsewhere in Europe and lasted until the 17th century. The Renaissance brought an all around change in the way people thought and in their beliefs. People began to discover the world and discover themselves as individuals. The world was beginning to change, technology progressed, and art and music became liberated. The Renaissance could also be known as a "Revival of Learning". People began to question the basic facts of life of which they were forced to accept. Acceptance was replaced with questioning, experimenting, understanding and learning. Central to the renaissance was humanism, the belief in the active, rather then the contemplative life and a faith in the republican ideal. However the greatest expression of the renaissance was in arts and learning. For example Alberti, in his writings on painting, created both methods of painting using perspective to create an illusion of a third dimension and a classically inspired non-religious subject matter. Even in his architecture, he created a system of simple proportion that was to be followed for hundreds of years. The Renaissance was heralded by the work of the early 14th-century painter Giotto in Florence, and in the early 15th century a handful of outstanding innovative artists emerged there: Masaccio, in painting, Donatello, in sculpture, and Brunelleschi, in architecture. ...read more.

He also believed that their study along with the Bible would promote greater religious devotion and goodness. This piety through literature was the basis of Erasmus's educational philosophy and his religious reformism. Erasmus attacked clerical abuse through his literature, he wrote "I could see that the common body of Christians were corrupt not only in its affections, but in its ideas." Like Erasmus, Petrarch restored the Latin classics and he initiated the recovery and revision of ancient texts that followed with the early 15th century. Petrarch would be considered a northern humanist because although he was born in Florence, he was raised in Provence. However although Humanism is associated more with the northern renaissance, the humanists of Italy had similar beliefs - Alberti of Florence believed that each person was responsible for their own destiny. The longing to come to terms with the way in which the world worked was an essential attribute in the learning of the renaissance, and it is certainly no big shock that important scientific developments occurred during the 15th and 16th centuries. Although Columbus was born in Italy, he would be associated with the northern renaissance, as his culture was purely Spanish. All his letters, even those addressed to Italians, were in Spanish. His studies of the Pole Star led him to the conclusion that the Earth was pear-shaped. ...read more.

1450. Bramante came closest to the recreation of classical ideas with works such as the Tempietto of San Pietro in Montorio, Rome, c. 1510 and the new basilica of St Peter's in Rome, begun 1506. Other Renaissance architects in Italy include Michelangelo, Giulio Romano, Palladio, Vignola, Sangallo, and Raphael. As Renaissance architecture spread throughout the rest of Europe it often acquired a distinctively national character through the influence of indigenous styles. Renaissance architecture in England is exemplified by the Queen's House at Greenwich, London, built by Inigo Jones 1637 and in France by the Louvre Palace built for Fran�ois I 1546. In Spain, a fusion of Renaissance and Gothic architectural forms led to the flamboyant style called Plateresque, 'Manuellian' in Portugal, typified by the fa�ade of the university at Salamanca, completed 1529. Overall, we can see that although the renaissance throughout Europe, meant a change in the way people thought, its' priorities varied from country to country. The Italian renaissance prioritised their art producing many famous works of art such as de Vinci's 'Mona Lisa', Michaelangelo's 'David' and hundreds more, nevertheless, humanism and discovery were not excluded. However the northern renaissance prioritised Humanism and discovery, although playing an important role in renaissance art. _____________________________ Sandra Byrne 1999 - First Year European Essay Tutor: Daire Keogh Student: Sandra Byrne Title: "Contrast the priorities of the northern and southern Renaissance. ...read more.