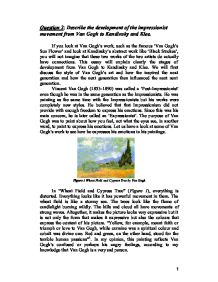 Describe the development of the impressionist movement from Van Gogh to Kandinsky and Klee.

Question 2: Describe the development of the impressionist movement from Van Gogh to Kandinsky and Klee. If you look at Van Gogh's work, such as the famous 'Van Gogh's Sun Flower' and look at Kandinsky's abstract work like 'Black Strokes', you will not imagine that these two works of the two artists do actually have connections. This essay will explain clearly the stages of development from Van Gogh to Kandinsky and Klee. We will first discuss the style of Van Gogh's art and how the inspired the next generation and how the next generation then influenced the next next generation. Vincent Van Gogh (1853-1890) was called a 'Post-Impressionist' even though he was in the same generation as the Impressionists. He was painting as the same time with the Impressionists but his works were completely new styles. He believed that that Impressionism did not provide with enough freedom to express his emotions. Since this was his main concern, he is later called an 'Expressionist'. The purpose of Van Gogh was to paint about how you feel, not what the eyes see, in another word, to paint to express his emotions. Let us have a look at some of Van Gogh's work to see how he expresses his emotions in his paintings. Figure 1 Wheat Field and Cypress Tree by Van Gogh In "Wheat Field and Cypress Tree" (Figure 1), everything is distorted. Everything looks like it has powerful movement in them. The wheat field is like a stormy sea. ...read more.

"The rhythm of the long, wavy lines seems to carry the echo of the scream into every corner of the picture, making of earth and sky one great sounding board of fear"3 Most of Munch's paintings are unpleasant. This may be because he himself is a sad character which we can sense this from his 'Self-Portrait with burning cigarettes' (Figure 9). In his self-portrait, the smoke of the cigarette is burning almost everywhere. The smoke and fire seems to represent hell and it shows that he is having an internal pain. It is like the burning hell is inside his mind. Figure 9 Self Portrait with burning cigarettes by Munch Figure 10 Puberty by Munch In the work 'Puberty' (Figure 10), a girl just discovered her body for the first time. Munch expressed uncertainty on her face and painted the shadow to show the girl's fear of growing up. Maybe when munch was growing up himself, he had to go through many suffering so he painted this. Figure 11 Self Portrait with a model by Kirchner Figure 12 Crucifixion by Nolde Although some of the viewers feel that Munch's painting were horrible, unpleasant and scary because they were still used to beautiful arts, Munch inspired a group of German painters. They were called 'Die Brucke' or 'The Bridge' (1906). They took up his ideas and take expressionism a step further. They would not paint with their eyes but their heart. In Kirchner's 'Self portrait with a model' (Figure 11) ...read more.