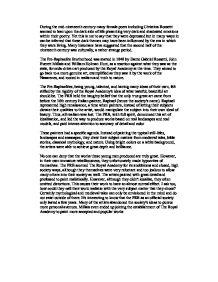 During the mid-nineteenth century many female poets including Christina Rossetti seemed to lean upon the dark side of life presenting very dark and shadowed emotions within their poetry. Yet this is not to say that they were depressed but in many ways ...

During the mid-nineteenth century many female poets including Christina Rossetti seemed to lean upon the dark side of life presenting very dark and shadowed emotions within their poetry. Yet this is not to say that they were depressed but in many ways in can be inferred that these dark themes may have been influenced by the era in which they were living. Many historians have suggested that the second half of the nineteenth century was culturally, a rather strange period. The Pre-Raphaelite Brotherhood was started in 1848 by Dante Gabriel Rossetti, John Everett Millais and William Holman Hunt, as a reaction against what they saw as the stale, formula-driven art produced by the Royal Academy at the time. ...read more.

The PRB held the haughty belief that the only true great art came from before the 16th century Italian painter, Raphael (hence the society's name). Raphael represented high renaissance, a time when painters, instead of letting their subjects dictate their qualities to the artist, would manipulate the subject into their own ideal of beauty. Thus, all realism was lost. The PRB, with full spirit, denounced this art of idealization, and led the way to produce works based on real landscapes and real models, and paid intense attention to accuracy of detail and color These painters had a specific agenda. ...read more.

The artists painted with great detail and professed to paint realistically. However, although they didn't idealize, they often omitted distortions. This causes their work to have an almost surreal effect. I ask too, how could they call their work realistic with the very subject matter that they chose? Certainly mythological and medieval tales can only be envisioned in the mind and do not exist outside of there. It's interesting to know that the PRB as an official society only lasted a few years. Many of the artists abandoned the society's ideas to pursue more personal avenues. Millais even ended up joining the establishment of The Royal Academy to paint more accepted and popular works ...read more.