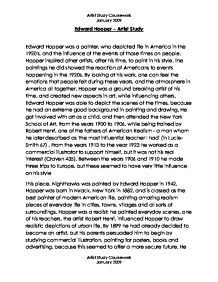 Edward Hooper - Artist Study Edward Hopper was a painter, who depicted life in America in the 1920's, and the influence of the events of those times on people. Hopper inspired other artists, after his time, to paint in his style. The paintings he did showed the reaction of Americans to events happening in the 1920s. By looking at his work, one can feel the emotions that people felt during these years, and the atmosphere in America all together. Hopper was a ground breaking artist of his time, and created new aspects in art, while influencing others. Edward Hopper was able to depict the scenes of the times, because he had an extreme good background in painting and drawing. ...read more.

Hopper was a realist; he painted everyday scenes, one of his teachers, the artist Robert Henri, influenced Hopper to draw realistic depictions of urban life. By 1899 he had already decided to become an artist, but his parents persuaded him to begin by studying commercial illustration, painting for posters, books and advertising, because this seemed to offer a more secure future. He first attended the New York School of Illustrating and then in 1900 transferred to the New York School of Art. As well as getting influenced by other great people, Hopper was a big figure to others. One of the reasons Hopper was able to depict the feeling of the 1920s was because he was influenced by other artists, and even film makers. ...read more.

There is a " loss of community amidst modern capitalist competitive interest" (Doss 84). Dawtrey, the author of Investigating Modern Art, also described Hoppers work as "an investigation of the alienating and dehumanizing effects of capitalist work processes". This was the idea of an "unseen observer" (Dawtrey 160). From the diaries of Edward's wife, Josephine, we can tell that his works, especially "Nighthawks", was a reaction to the Japanese assault on Pear Harbor in 1941, after which the organized nation practically fell apart, due to shock (Beckett 137). Hopper also made up a new concept in art, which was then adapted by other painters, such as Burgin. These are the works that are most known, and used to represent life in the US. ?? ?? ?? ?? Artist Study Coursework January 2009 Artist Study Coursework January 2009 ...read more.