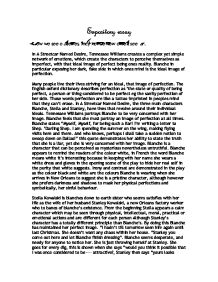 Expository essay 'How we see ourselves, may not be how others see us'. In A Streetcar Named Desire, Tennessee Williams creates a complex yet simple network of emotions, which create the characters to perceive themselves as imperfect, with that ideal image of perfect being ones reality. Blanche in particular exposing her dark, fake side in which ones mind is the ideal image of perfection. Many people live their lives striving for an ideal, that image of perfection. The English oxford dictionary describes perfection as 'the state or quality of being perfect, a person or thing considered to be perfect eg the sanity perfection of her skin. Those words perfection are like a tattoo imprinted in peoples mind that they can't erase. In A Streetcar Named Desire, the three main characters Blanche, Stella and Stanley, have lives that revolve around their individual ideals. ...read more.

Irony and contrast are demonstrated in the play as the colour black and white are the colours Blanche is wearing when she arrives in New Orleans to suggest she is a pristine character, although however she prefers darkness and shadows to mask her physical perfections and symbolically, her sinful behaviour. Stella Kowalski is blanches down to earth sister who seems satisfies with her life as the wife of her husband Stanley Kowalski, a new Orleans factory worker who to banes of blanche's existence. From the beginning Stella appears a calm character which may be seen through physical, intellectual, moral, practical or emotional actions and are different for each person Although Stanley's character has a totally different principle than Blanche's. By doing this Blanche has maintained her perfect image. "I hadn't till tomorrow seen him again until last Christmas. ...read more.

The stereotyped woman is made known far and wide, and for a distinguished woman from a rich background to marry a homosexual in the 1940's, as readers we can only imagine Blanche's decrease in her sense of self-worth. Blanche comes across as an attention seeker but we believe she does it because she been hurt, because she blames herself for what happened to her husband and because of what he did to her she doubts herself as a woman. By flaunting herself to men it seems like she has them, to some extent under her own control, that she can persuade them to do things, in other words its like saying they're under her "spell" so to speak. As readers we are shown that Blanche is a collaboration of the life stories of men and women everywhere, that all we perceive is ourselves as imperfect, with that ideal image of perfect being ones reality. In saying that is it true to say that how we see ourselves, may not be how others see us. ...read more.