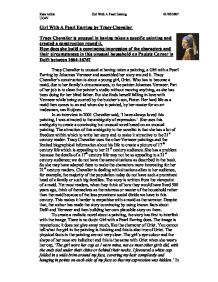 Girl With A Pearl Earring by Tracy Chevalier

Girl With A Pearl Earring by Tracy Chevalier Tracy Chevalier is unusual in having taken a specific painting and created a construction round it. How does she build a convincing impression of the characters and their circumstances in this unusual household on Papists Corner in Delft between 1664-1676? Tracy Chevalier is unusual at having taken a painting, a Girl with a Pearl Earring by Johannes Vermeer and assembled her story around it. Tracy Chevalier's construction is about a young girl, Griet. Who has to become a maid, due to her family's circumstances, to the painter Johannes Vermeer. Part of her job is to clean the painter's studio without moving anything, as she has been doing for her blind father. But she finds herself falling in love with Vermeer while being courted by the butcher's son, Pieter. Her hard life as a maid then comes to an end when she is painted, by her master for an art tradesman, van Ruijven. In an interview in 2001 Chevalier said, 'I have always loved this painting, I was attracted to the ambiguity of expression.' She uses this ambiguity to create a convincing but unusual novel based on an unusual painting. The attraction of this ambiguity to the novelist is that she has a lot of freedom within which to write her story and to make it attractive to the 21st century reader. Tracy Chevalier uses the other Vermeer paintings and the limited biographical information about his life to create a picture of 17th century life which is appealing to her 21st century audience. She has a problem because the details of a 17th century life may not be so appealing to a 21st century audience; we do not have the same situations as described in the book. So she may have adapted them to make the characters more interesting for her 21st century readers. Chevalier is dealing with situations alien to her audience, for example, the majority of the population today do not have such a prominent head of a family or such big families. ...read more.

She is a perfectionist; this shows when she comments on the untidiness of Catherina, 'The woman looked as if she had been blown about by the wind, although it was a calm day.' Also her artistic eye, makes her move the cloth even with the risk of losing her job when any other time she would have done anything to avoid becoming redundant, but she feels she has to do it for the painting, 'Yes, I thought, and pressed my lips together. He may send me away for changing it, but it is better now.' She wants to be independent and that may be the reason she does not want to marry Pieter. She does not want to be an object transferred from her father to Pieter, which is unlike any situation we have today, but we can still sympathise with her as the book is well written. Nothing is hers, not even the painting she is sitting for is hers, 'It is not for me to say, sir. It is not my painting.' He frowned. 'No, it is not yours. He sounded as if he was speaking to himself.' Griet is very tactful, which is useful in the house where she works and lives, as Catherina, Maria Thins (Vermeer's mother-in-law) and Tanneke quickly are upset and there is great need to be tactful. An example of this is when Griet first comes to the house and she finds out Tanneke has been doing all the work herself, 'Tanneke, have you been doing all this yourself?' I had chosen the right words. 'And some of the shopping.' Tanneke puffed up with pride at her own industry.' Griet uses similes, which tells us exactly how she feels, and also shows us Griet thinks in image-based way, like an artist. Griet is very family orientated, as would have been the case of a young girl in the 1600's. ...read more.

This might not have been true in the 17th century but it is how modern children behave. The sexual tension between the powerless Griet and the very powerful Van Ruijven is significant since Griet has to endure it and has no one to help her, as she would today. Also when Van Ruijven realises that Griet in not interested in him, he goes around hinting to Catherina about the painting that he has made Griet sit for and working on Catherina's jealousy. 'I don't know about that.' Van Ruijven worked so hard to sound sly even Catherina could not miss the hint.' The way Griet feels about Van Ruijven, her anxiety, anger and powerlessness make us feel it too and adds to our sympathy. We can understand van Ruijven because he processes many of the same characteristics of a modern day baddie. Art is the focus of the novel. The lives of all the characters in the novel are corrupted by Art and revolve around it. Griet and Vermeer both put Art above everything else, for example, when Vermeer makes Griet wear Catherina's pearl earring knowing that it will be the ruin of Griet but not caring about that, only about what will make the painting look good. The main reason for all the tension is the eyes of everyone in the house, always watching, always judging, coming out of the shadows and just around the corner. The claustrophobia draws us into the novel and involves the reader. Griet has to be on guard all the time, adding to the uneasy feeling of the house. Tracy Chevalier's Girl with a Pearl Earring is a very convincing novel, based on the believable setting of Delft and the book's strong characters. She has obviously studied Vermeer's paintings in depth and the historical information on the period and produced an entertaining and believable piece of literature. The tension of the Catholic household and the claustrophobia within Delft society draw us into this 17th/21st century novel and keep us persuaded of the novel's realism. Kate Addis Girl With A Pearl Earring 01/05/2007 UC4V ...read more.