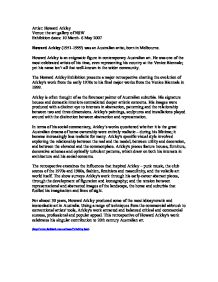 Artist: Howard Arkley Venue: the art gallery of NSW Exhibition dates: 10 March- 6 May 2007 Howard Arkley (1951-1999) was an Australian artist, born in Melbourne. Howard Arkley is an enigmatic figure in contemporary Australian art. He was one of the most celebrated artists of his time, even representing his country at the Venice Biennale; yet his name isn't all that well-known in the wider community. The Howard Arkley Exhibition presents a major retrospective charting the evolution of Arkley's work from the early 1970s to his final major works from the Venice Biennale in 1999. Arkley is often thought of as the foremost painter of Australian suburbia. His signature houses and domestic interiors contradicted deeper artistic concerns. His images were produced with a distinct eye to interests in abstraction, patterning and the relationship between two and three dimensions. Arkley's paintings, sculptures and installations played around with the distinction between abstraction and representation. In terms of his social commentary, Arkley's works questioned whether it is the great Australian dreams of home ownership were entirely realistic - during his lifetime; it became increasingly less realistic for many. Arkley's specific visual style involved exploring the relationship between the real and the model, between utility and decoration, and between the elevated and the commonplace. Arkley's pieces feature houses, furniture, decorative schemes and optically turbulent patterns, which draw on both his interests in architecture and his social concerns. The retrospective examines the influences that inspired Arkley - punk music, the club scenes of the 1970s and 1980s, fashion, feminism and masculinity, and the volatile art world itself. The show surveys Arkley's work through his early-career abstract pieces, through the development of figuration and iconography; and the tension between representational and abstracted images of the landscape, the home and suburbia that fuelled his imagination and lines of sight. ...read more.

Every year ARTEXPRESS presents a snapshot of up-to-the-minute insight into students' creativity and the issues and ideas they elect as especially relevant to them. It provides a window on the sustained and focused engagement with art practice by youth, alongside a confirmation of the outstanding talent and ongoing professionalism of NSW Visual Arts teachers. Selections of works submitted for the NSW Higher School Certificate Visual Arts examination have been presented in the Art Gallery of New South Wales, the exhibition's principal venue, since 1983. ARTEXPRESS affirms the Gallery's commitment to, and participation in, art education by encouraging the work of student artists to be seen alongside that of professional artists in a Gallery environment. The Art Gallery of New South Wales is proud to present this exhibition of outstanding art practice being generated in our classrooms. ARTEXPRESS is a joint project of the NSW Department of Education and Training and the Board of Studies NSW in association with the Art Gallery of New South Wales. http://www.insideartexpress.com.au/about/overview Artist: Cassandra Pryor Artwork: Exploration Of Natural Surfaces Media/ Form: Textiles and Fibre School: Coffs Harbour Senior College Description: Exploration of Natural Surfaces is an abstract series of pieces that explores a variety of traditional and experimental textile and fibre techniques. The limited colour scheme and organisations is derived directly from observing nature. This examination produced artworks that are at times formal and schematic but at other times spontaneous and tactile. Artist: Sarah Moth Artwork: Native Patterns Media/ Form: Sculpture School: Hunter Valley Grammar School Description: "Native Patterns" explores the aesthetics of the environment and the naturally occurring patterns that we often neglect or overlook. ...read more.

Her work is represented in collections in Australia and overseas, including the National Portrait Gallery of Australia. Danelle is a finalist in this year's Archibald and was a finalist last year for her painting of Kevin Connor. http://www.thearchibaldprize.com.au/winners/prp John Beard Janet Laurence Sydney artist John Beard has won the 2007 Archibald Prize for his painting of Janet Laurence. The Archibald Prize is now in its 86th year. John receives a prize of $35,000 Janet Laurence is an installation artist whose work extends from the gallery into urban spaces. A former AGNSW trustee, she has undertaken numerous public commissions. Her work is held in public and private collections in Australia and internationally. It has been said that Laurence's work echoes architecture and yet retains a sense of the instability and transience found in nature; John Beard's monochromatic portraits of fellow artists share similar qualities. While painting the structure, or architecture, of his friends' heads and faces, he also aims to capture the sense of fleeting, ever-changing expression. From this collaboration of artist and artist-as-subject, a kind of double portraiture emerges. If a viewer knows the work of the artist portrayed, another visual layer resonates. Without the use of colour - that might highlight the differences or similarities between his subjects - Beard focuses the viewer's attention not just on the individual sitter but on the structure of the painting itself. Light plays an important role in the visual dynamic of the image as we literally move around these sculptural works to fully appreciate their form and making. http://www.thearchibaldprize.com.au/winners/archibald "Many people will walk in and out of your life, But only true friends will leave footprints in your heart. To handle yourself, use your head; To handle others, use your heart. Eleanor Roosevelt ...read more.