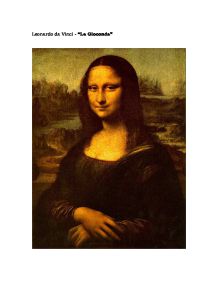 Leonardo da Vinci - "La Gioconda" Leonardo da Vinci was born in 1452, the town who's name he kept as his last name, near Tuscan. From his early age his talents were so apparent that his father took him to Florence when he was fourteen, to study painting and sculpture in Andrea Verrocchio's workshop. There he met also Botticelli and Ghirlandaio. During his years near Verrocchio he studied also mathematics and geometry, as well as begun to strengthen his sense of observation, as he believed that only through observation one can achieve understanding of natural phenomena. This knowledge he used in his paintings, in order to make his images more lifelike. Thirteen years after he went to Verrocchio he started his own business as a painter. He made religious paintings for the nobility and the bourgeoisie, as well as for monasteries and people of religion. It is safe to say that Leonardo was born in a time were Art was highly appreciated and received great interest. However, his genius was bound to be revealed. In 1482 he was approved to join Duke Ludovico Sforza's court where he worked as an artist. ...read more.

Sfumato smoky in Italian, and is certainly obvious why. Chiaroscuro is a technique of using shading and illuminating in a painting, creating a wonderful contrast. It derives from the Italian words Chiaro and Oscuro, which mean light and dark accordingly. The details of the light on Mona-Lisa's skin and the way the colour changes in certain parts of the flesh, is given by Leonardo in a very realistic way. It is important tha Leonardo was doing the painting for three years and therefore, envisaged the details of the light and shade perfectly. The Gioconda is a painting who's equal has not being painted before and perhaps, never will be. These techniques were not only introduced by Leonardo, but also were taught by him to great artists of the Renaissance, suck as Fra Bartolommeo and Raphael. Leonardo da Vinci was a perfectionist who not only tried to be perfect in everything he did, but also had the potential to do so. He may be one of the few people whose ambitions do not derive from arrogance but from full self-awareness. "As curiosity took him in even wilder directions, Leonardo always used this method of scientific enquiry: close observation, repeated testing of the observation, precise illustration of the subject object or phenomenon with brief explanatory notes. ...read more.

However, there are many theories that discover different kinds of possibilities, such as being "Isabelle of Este, {...}a mistress of Giuliano di Medici or of Leonardo himself; perhaps an ideal woman; and even an adolescent boy dressed as a woman, or possibly a self-portrait." [http://www.louvre.fr/anglais/collec/peint/joconde/txtjocon.htm] Leonardo kept the painting after he made it and sold it later, during his stay in France, to King of France Francois I. "The painting remained in the royal collection from the beginning of the sixteenth century to the creation of the Central Art Museum of Louvre." [http://www.louvre.fr/anglais/collec/peint/joconde/txtjocon.htm] Even though the painting was famous since when it was created, it obtained world fame when it was stolen by Vicenzo Peruggia, an Italian painter, in 1991. The Mona-Lisa was later found in Italy in 1913 and was returned to the Louvre, "treated with the honours accorded to a head of state, after having occupied, throughout this period, the front pages of the world's newspapers." [http://www.louvre.fr/anglais/collec/peint/joconde/txtjocon.htm] During the 1960's and the 1970's the Gioconda was exposed in New York and Tokyo being the only journeys she will ever make, as contemporary international rules forbid it. This moment the Gioconda hangs behind a bulletproof glass in the Louvre never to be moved again. ...read more.