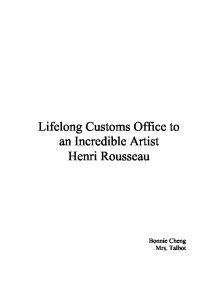 Lifelong Customs Office to an Incredible Artist Henri Rousseau Bonnie Cheng Mrs. Talbot Grade 10 Art November 15, 2002 Lifelong Customs Office to an Incredible Artist Henri Rousseau A dream- like French artist, Henri Rousseau had filled our world with his fabulous paintings. He was born in 1844 in Laval, France, on a town midway between Paris and Brittany. However he had died of blood poisoning at an age of 66. He had lived for most of his life serving as a toll collector then finally fulfilling his dreams being one of the most celebrated painters. Henri Rousseau was born gifted and had displayed lots of talents in the arts music. He had set his dreams toward being an artist. He educated at Laval Elementary School that started out to be a good way to reach his goal. However with family's financial problem, his father lost all they processed. With this challenge, Henri was unable to pursue his dreams of attending an art school. With his father's bankruptcy they moved to Angers. So setting his dreams aside, Henri started to begin working at a young age. He enlisted to be a soldier and served in the army. ...read more.

With the lack of experience and training, he was fateful with the concept of perspective. (Pioch) He tries to compel the viewer to reconstruct his landscapes visually step by step. (Shabenow) He also distributed the colors in a unique way that made the objects separate from each other. Each object was seen separately, generally full face, and the outlines were very clear. (Pioch) With his interests in forests, he worked through his paintings of scenes of the jungle with his extraordinary imagination. (Pioch) In 1899 he married to a widow Josephine-Rosalie Nourry. Together, they opened a stationery shop where his paintings were offered for sale. Henri also gave lessons at an adult education center to teach others how to paint. However Josephine died shortly of illness and after a few years later, Henri was introduced to the poet Guillaume Appolliniare. Appolliniare praised Henri, " Glorious painter of the Replubic's spirit, The Proud Independents hail your name as their banner." (Appolliniare) He also introduced a few famous artists to Henri too. One of them was Pablo Picasso who was one of the people who adored Henri's work and said, " There is nothing odd about Rousseau. He is the most perfect representation of a distinctive and immutable logic."(Picasso) ...read more.

It really portrayed the theme of war, which was also dealt with blood and death. I thought this painting was really interesting because the colors he used look really sharp and appealing. I liked how he used black to deal with death and how he used red clouds for blood. I thought this was an awesome painting. Henri Rousseau, The Dream (1910) was one of the last paintings he ever painted before he died. The woman in the picture was supposed to represent his first wife who died of tuberculosis. He painted it very mystical with the jungle and the glowing moon at night. It seemed to make the jungle peaceful and wonderful. When I looked at the painting, I disliked it because it was a bare naked woman. Yet after I found information on it and Henri drew it to represent his wife. I thought it was very touching so I thought about describing it. I liked the jungle and the trees. It seemed so alive. Henri Rousseau, the na�ve artist would always be remembered by his creativity through each of his art. He had brought inspiration to any young artists who intend to be a professional. He didn't attend to an art school yet he was still famous for his art. Art is not why comes from educations or school. It comes from the heart and your creativity. ...read more.