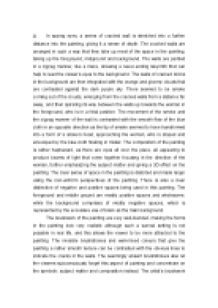 ﻿1) In spying eyes, a series of cracked wall is stretched into a further distance into the painting, giving it a sense of depth. The cracked walls are arranged in such a way that they take up most of the space in the painting, taking up the foreground, midground and background. The walls are painted in a zigzag manner, like a maze, showing a never-ending labyrinth that can help to lead the viewer?s eyes to the background. The walls of cracked bricks in the background are then integrated with the orange and gloomy clouds that are contrasted against the dark purple sky. There seemed to be smoke coming out of the clouds, emerging from the cracked walls from a distance far away, and then spiraling its way between the walls up towards the woman in the foreground, who is in a fetal position. The movement of the smoke and the zigzag manner of the wall is contrasted with the smooth flow of the blue cloth in an opposite ...read more.

The invisible brushstrokes and well-mixed colours that give the painting a rather smooth texture can be contrasted with the obvious lines to indicate the cracks in the walls. The seemingly absent brushstrokes also let the viewers subconsciously forget this aspect of painting and concentrate on the symbolic subject matter and composition instead. The artist?s brushwork also brings out the fluidity or rigidity of the objects, depending on what they intended to be. The rigid hard brick walls and the fluid cloth seemed to embody the situation the artist is in, where they show the contrast between harsh criticism and skeptical looks of the society against her vulnerable, soft self. 2) ?Spying Eyes? depicts an insecure women which is actually herself, floating above the ground, being spied by many eyes on the walls around her, which represents the society's traditional view on women, also showing that she felt very vulnerable, weak and passive about the society's inequality and unfair, unequal views on gender issues. ...read more.

The cracked brick walls also represent her struggles in the society as she did not like people to judge and view her in the traditional way. However, in ?Sri Kandi?, she painted her confidence and determination to confront all judgments of the society. Hartini depicts herself as "Sri Kandi" who is a Javanese traditional puppet that represents a Mahabrata epic, warrior women in the past, to show that she is bold and brave, and has changed from someone who is powerless, vulnerable to someone who can overcome her struggles and problems. Also, the subject matter in the painting is wearing blue cloth which symbolizes her strength like female warriors in the past who also wore blue. Her pose seems to want to convey to viewers how strong-willed she has become and she no longer feels constrained by the society's traditional judgments. The blue drapery from her dress also extends out and is lying on the brick walls, showing a sense of stability that Hartini feels towards her struggles in the past. ...read more.