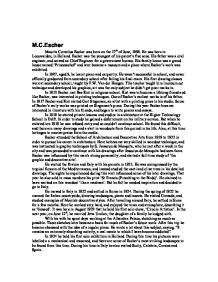 M.C.Escher Maurits Cornelius Escher was born on the 17th of June, 1898. He was born in Leeuwarden, in Holland. Escher was the youngest of his parent's five sons. His father was a civil engineer, and served as Chief Engineer for a government bureau. His family home was a grand house named 'Princessehof' and later became a museum and a place where Escher's work was exhibited. In 1907, aged 9, he learnt piano and carpentry. He wasn't successful in school, and never officially graduated from secondary school after failing his final exam. His first drawing classes were at secondary school, taught by F.W. Van der Haagen. This teacher taught him linoleum cut technique and developed his graphics, art was the only subject he didn't get poor marks in. In 1913 Escher met Bas Kist in religious school. Kist was to become a lifelong friend and like Escher, was interested in printing techniques. One of Escher's earliest works is of his father. In 1917 Escher and Kist visited Gert Stegeman, an artist with a printing press in his studio. Some of Escher's early works was printed on Stegeman's press. During this year Escher became interested in literature with his friends, and began to write poems and essays. In 1918 he started private lessons and studies in architecture at the Higher Technology School in Delft. ...read more.

These sketches later became a basis for much of Escher's future work. After this trip he became obsessed with the idea of a regular plane. He wrote a lot about this subject, saying, "It remains an extremely absorbing activity, a real mania to which I have become addicted". In 1924 he held his first solo exhibition in Holland. During this time his pictures were labelled a s mechanical and reasoned, and there are some of Escher's most striking landscapes to be found from this time. During his time in Italy he also visited Sicily, Calabria, Corsica and Spain. In 1933 the printroom of Rijksmuseum, Amsterdam, bought 26 of Escher's prints. In May of 1933 Escher made 19 drawings of Corsica which later became wood engravings and lithographs. During this year he also created some prints for 'The Terrible Adventures of Scholastica', a horror book. In 1934 he and his family visited the seashore, and Escher and his wife went on to see Belgium, Bruges and Ghent. During this time his work was gaining recognition and success in America. His print 'Nonza' received third prize at the Exhibition of Contemporary Prints at the Art Institute of Chicago. They went on to purchase the print, Escher's first sale to an American museum. Escher travelled to Amsterdam after staying at his parent's house at The Hague in 1935. ...read more.

He described how the alderman was unsuccessful in pinning the badge to him: "He was too nervous- or the safety pin would not go through my lapels. At any rate, your dad is a knight, if not of the garter. Why in the world should they want to decorate me is a complete mystery. I can only hope it is not a complete mistake." In 1957 he started a wall mural in the city of Utrecht in Holland. He spent that year and the next working on this project. On March 17, in 1971, Escher died, aged 73, in the Hilversum Hospital. Escher's work intrigued mathematicians and psychologists because of his visual perception. Since the 1960s some young people felt that his images complemented and were similar to experiences brought on by taking hallucinogenic drugs. Escher wrote of his work: "By considering and analysing the observations that I had made, I ended up in the domain of mathematics. Although I am absolutely innocent of training or knowledge in the exact sciences, I often seem to have more in common with mathematicians than with my fellow artists." Escher was also greatly admired by the Surrealist artists. They felt his work was surreal and considered him to be a surrealist. His work became more Surrealist from around 1940, with prints of bizarre buildings where he used optical illusions. One of the images he used was staircases, which can be perceived as going upward and downward at the same time in the same direction. ...read more.