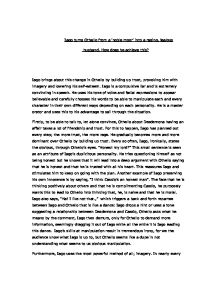 Iago turns Othello from a 'noble moor' into a raging, jealous husband. How does he achieve this? Iago brings about this change in Othello by building up trust, provoking him with imagery and lowering his self-esteem. Iago is a compulsive liar and is extremely convincing in speech. He uses his tone of voice and facial expressions to appear believable and carefully chooses his words to be able to manipulate each and every character in their own different ways depending on each personality. He is a master orator and uses this to his advantage to sail through the situation. Firstly, to be able to talk to, let alone convince, Othello about Desdemona having an affair takes a lot of friendship and trust. For this to happen, Iago has planned out every step; the more trust, the more rage. He gradually becomes more and more dominant over Othello by building up trust. ...read more.

drops a hint or uses a tone suggesting a relationship between Desdemona and Cassio, Othello asks what he means by the comment, Iago then demurs, only for Othello to demand more information, seemingly dragging it out of Iago while all the while it is Iago leading this dance. Iago's skills at manipulation result in tremendous irony, for we the audience know what Iago is up to, but Othello seems like a dupe in not understanding what seems to us obvious manipulation. Furthermore, Iago uses the most powerful method of all; imagery. In nearly every scene, Iago floods Othello's mind with very vivid imagery of the affair. The most obvious imagery is talking about jealousy. "O beware, my lord, of jealousy....green eyed-monster" This is a very powerful image as it is epitomizing Othello's animalistic characteristics and at the same time giving us an outlook of how badly the situation could get. ...read more.

This just outlines how disproportionate he is compared to all the 'others' seeing as he is a "moor". He also seems to be relating nearly every aspect of animilistic characteristics. " As prime as goats, as hot as monkeys" There could have been a variety of ways to put this sentence, but Iago specifically chose these for a reason; as every move Iago makes has it's motive. By saying goats, he could be relating to how goats have their horns on their foreheads and when someone is jealous they do too- green-eyed monster, and also that he talks about monkeys which, without question is talking about how beasty he is. Overall, Iago's manipulation all goes well as he stays close and at the same time has his ways of communication. Most blame Iago for his duplicitous behaviour, but some blame should also be laid upon Othello, who chose not to handle the situation with calm reason, but with the green-eyed monster which, eventually "mocks the meat it feeds on". ...read more.