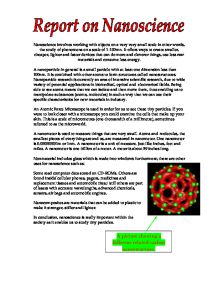 Nanoscience. Nanoscience involves working with objects on a very very small scale in other words, the study of phenomena on a scale of 1-100mn.

Nanoscience involves working with objects on a very very small scale in other words, the study of phenomena on a scale of 1-100mn. It offers ways to create smaller, cheaper, lighter and faster devices that can do more and cleverer things, use less raw materials and consume less energy. A nanoparticle in general is a small particle with at least one dimension less than 100nm. It is combined with other atoms to form structures called nanostructures. Nanoparticle research is currently an area of intensive scientific research, due to wide variety of potential applications in biomedical, optical and electronical fields. Being able to see atoms means that we can isolate and then move them, thus enabling us to manipulate substances (atoms, molecules) in such a way that we can use their specific characteristics for new materials in industry. An Atomic Force Microscope is used in order for us to see these tiny particles. If you were to look closer with a microscope you could examine the cells that make up your skin. ...read more.

This division helps to distinguish between developments in different fields, but there is naturally some overlap. 3 Where possible, we define the development of future applications as short term (under 5 years), medium term (5-15 years), and long term (over 20years). It may be that some of the potential applications that we identify are never realised, whereas others that are currently unforeseen could have a major impact. We also identify potential in environmental, health and safety, ethical or societal implications or uncertainties that are discussed further in later chapters. 4 Current industrial applications of nanotechnologies are dealt with in Chapter 4, as are the factors that will influence their application in the future. 3.2 Nanomaterials 3.2.1 Introduction to nanomaterials 5 A key driver in the development of new and improved materials, from the steels of the 19th century to the advanced materials of today, has been the ability to control their structure at smaller and smaller scales. The overall properties of materials as diverse as paints and silicon chips are determined by their structure at the micro- and nanoscales. ...read more.

As growth and catalytic chemical reactions occur at surfaces, this means that a given mass of material in nanoparticulate form will be much more reactive than the same mass of material made up of larger particles. 8 In tandem with surface-area effects, quantum effects can begin to dominate the properties of matter as size is reduced to the nanoscale. These can affect the optical, electrical and magnetic behaviour of materials, particularly as the structure or particle size approaches the smaller end of the nanoscale. Materials that exploit these effects include quantum dots, and quantum well lasers for optoelectronics. 9 For other materials such as crystalline solids, as the size of their structural components decreases, there is much greater interface area within the material; this can greatly affect both mechanical and electrical properties. For example, most metals are made up of small crystalline grains; the boundaries between the grain slow down or arrest the propagation of defects when the material is stressed, thus giving it strength. If these grains can be made very small, or even nanoscale in size, the interface area within the material greatly The Royal ?? ?? ?? ?? ...read more.