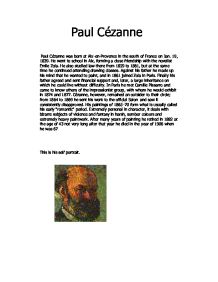 Paul C�zanne Paul C�zanne was born at Aix-en-Provence in the south of France on Jan. 19, 1839. He went to school in Aix, forming a close friendship with the novelist Emile Zola. He also studied law there from 1859 to 1861, but at the same time he continued attending drawing classes. Against his father he made up his mind that he wanted to paint, and in 1861 joined Zola in Paris. Finally his father agreed and sent financial support and, later, a large inheritance on which he could live without difficulty. In Paris he met Camille Pissarro and came to know others of the impressionist group, with whom he would exhibit in 1874 and 1877. ...read more.

The Vase Of Flowers The painting is a still life portrait of a light blue vase of a variety of different coloured flowers with green foliage. The vase is placed on a tablecloth which has dark blue flowers printed on a white material. The flowers on the tablecloth are spaced out, they appear to be the same size as the base of the vase. The picture is arranged with the main object that is the blue vase with a variety of flowers. The vase has depth, this has been created by a shadow behind the vase and the table finishing half way up the vase. It also has a dark background and light foreground, the picture has a foreground and in it, it has the vase of flowers, and the background is just a mixture of blurred colours. ...read more.

All of the marks that the artist has made are smooth, there is a lot of tone where the light falls on the vase. It is white, the light falls on the middle of the vase, so the rest of the vase is slowly darkening and right at the edge it is dark blue. The lines on the foliage are quite jagged and flared, but the flowers are painted with smooth lines. The picture makes me feel very relaxed and settled. I don't really know what the artist is trying to communicate. I like this picture because it is simple and the subject is captured well. I think it is skilful because it has no set flower, they are all different and it has no specific background so it could be anywhere. ...read more.