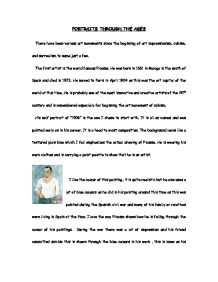 Portraits through the ages.

PORTRAITS THROUGH THE AGES There have been various art movements since the beginning of art impressionism, cubism, and surrealism to name just a few. The first artist is the world famous Picasso. He was born in 1881 in Malaga in the south of Spain and died in 1973. He moved to Paris in April 1904 as this was the art capital of the world at this time. He is probably one of the most innovative and creative artists of the 20th century and is remembered especially for beginning the art movement of cubism. His self portrait of "1906" is the one I chose to start with. It is oil on canvas and was painted early on in his career. It is a head to waist composition. The background looks like a textured plain blue which I fell emphasizes the actual drawing of Picasso. He is wearing his work clothes and is carrying a paint palette to show that he is an artist. I like the colour of this painting, it is quite realistic but he also uses a lot of blue colours as he did in his painting around this time as this was painted during the Spanish civil war and many of his family or relatives were living in Spain at the time. ...read more.

She is shown crying as she is supposed to stand for all the Spanish women who have lost loved ones in the Spanish Civil War. The colours are bright and unrealistic there is lots of green used. There is also allot of white, yellow, and red, black is also a prominent colour. I much prefer the colours of Picasso's "Self Portrait" "1906" I earlier wrote about. There is not much tone is it mostly block colour, this painting looks awfully flat I dislike the later style of cubist painting. I prefer smooth lines and delicate realistic colours. The light source appears to be coming from the left, shining in the left side of the face mainly on the mouth area which has been painted white. Thick paint has been used and the brush strokes are visible and appear to go in all different directions, they are dragged across the page. I don't like this it's too wild but I admire the smooth painting of Picasso's earlier work before he turned to cubism for example one painting I particularly like is "Madame Canals" "1905". All surfaces are painted in the same way except from the black outlines which are very smooth. ...read more.

The directional light is coming from the front on this painting but it is not a strong light. I like this painting and admire it very much. There are thick visible brush strokes that are loose and free. I love how this painting looks like it has been rushed and painted quickly but it's exciting and wild brush strokes just capture the moment. This painting for me shows how the impressionist art movement sought to depict whatever they could see at a given moment in time. Most impressionist painters would paint outside to get the most out of what they were painting. The impressionist movement began around 1867. There is lots of texture in this painting and most surfaces are painted in the same way. The hair and skin are made up of dashed lines of different colours which build up the overall look of the painting. The eyes don't look real they look slightly like glass as they are painted all as one colour. The free, scumbled textured surface of Cassatt's study totally sums up impressionism for me. Of the two artists I studied, my preference isn't the world famous Picasso but for Cassatt's more domestic studies of family and friends, her wonderful handling of paint in particular or may be I'm impressed by her being a woman, or I simply prefer impressionism to cubism. 1608 WORDS ...read more.