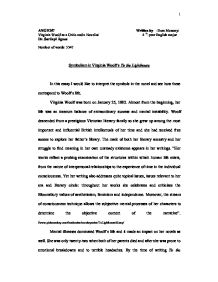 Symbolism in Virginia Woolf's To the Lighthouse

ANG 9247 Written by: Dora Mosonyi Virginia Woolf as a Critic and a Novelist 4th-year English major Dr. Sur�nyi �gnes Number of words: 3547 Symbolism in Virginia Woolf's To the Lighthouse In this essay I would like to interpret the symbols in the novel and see how these correspond to Woolf's life. Virginia Woolf was born on January 25, 1882. Almost from the beginning, her life was an insecure balance of extraordinary success and mental instability. Woolf descended from a prestigious Victorian literary family so she grew up among the most important and influential British intellectuals of her time and she had received free access to explore her father's library. The mark of both her literary ancestry and her struggle to find meaning in her own unsteady existence appears in her writings. "Her works reflect a probing examination of the structures within which human life exists, from the nature of interpersonal relationships to the experience of time in the individual consciousness. Yet her writing also addresses quite topical issues, issues relevant to her era and literary circle: throughout her works she celebrates and criticizes the Bloomsbury values of aestheticism, feminism and independence. Moreover, the stream of consciousness technique allows the subjective mental processes of her characters to determine the objective content of the narrative". /www.pinkmonkey.com/booknotes/monkeynotes/ToLighthouse10.asp/ Mental illnesses dominated Woolf's life and it made an impact on her novels as well. She was only twenty-two when both of her parents died and after she was prone to emotional breakdowns and to terrible headaches. By the time of writing To the Lighthouse Woolf had been over a suicide attempt, she threw herself out of a window. Following the death of her parents she was suffering from hallucinations and fears created by the loss of her mother. "She declares herself guilty in losing her mother because she was an egoist, she failed to prove her love, she was lazy and gluttonous". ...read more.

Lily's picture! Mrs. Ramsay smiled. With her little Chinese eyes and her puckered - up face she would never marry; one could not take her painting very seriously; but she was an independent little creature, Mrs Ramsay liked her for it, and so remembering her promise, she bent her head. (10) In the first part of the novel Lily did not finish her painting, it is only in the last part that she suddenly remembers the painting and decides to finish it. Mrs Ramsay's appearance lives now in her memories. She fetched herself a chair. She pitched her easel with the precise old maidish movements on the edge of the lawn, not too close to Mr Carmichael, but close enough for his protection. Yes, it must have been precisely here that she had stood ten years ago. There was the wall, the hedge, the tree. The question was of some relation between those masses. She had borne it in her mind all these years. It seemed as if the solution had come to her: she knew now hat she wanted to do. (108 - 109) The painting has a symbolic meaning: when Lily is painting, Mr Ramsay with the children go to the lighthouse. A parallel comes into being between the rhythm of the boat in the sea and how Lily makes a stroke on the canvas. As Lily watches the boat approaching the lighthouse, she thinks about the importance of distance. It helps people to understand the significance of the other. So much depends then, thought Lily Briscoe, looking at the sea which had scarcely a stain on it, which was so soft that the sails and the clouds seemed set in its blue, so much depends, she thought, upon distance: whether people are near us or far from us; for her feeling for Mr Ramsay changed as he sailed further and further across the bay. ...read more.

The first section begins on a pre-war September afternoon and ends with the dinner party.. The second section "jumps" ten years and describes the destruction of the war and the house. The second part transforms the novel's development. Many of the characters from the first section disappear and we only get to know about them in brackets, including the death of Mrs Ramsay, his son Andrew and one of her daughters Prue. Woolf puts an emphasis on the destruction of the war, the characters and the events are at the background. The last section takes place on a September day ten years later, from morning till noon. The passage of time is the most observable when children suddenly grow up, childhood is over and they become adults. For Mrs Ramsay, childhood means something happy, oblivious, pleasant time of life. Looking out of the window she says "Why, she asked, pressing her chin on James' head, should they grow up so fast? Why should they go to school? She would have liked always to have had a baby. She was happiest carrying on in her arms. And, (...) she thought, (...) why must they grow up and lose it all? Never will they be so happy again". (40) For Woolf it caused a rupture due to her mother's sudden death. The passing of time saddens Ms Ramsay as well because at the end of the first section he regrets that the best period of his life is coming to an end: "Years ago, before he had married, he thought, he had walked all day. He had worked ten hours at a stretch ..." (47). According to Agnes B�csy, the main point of the novel is that reaching the lighthouse can only be accomplished if one has the harmony of quest and union in Life itself, which realises it and in the work of art, which expresses it. The novel is an "untranslatable" symbol. Its meaning can only be grasped if its meaning is destroyed. ...read more.