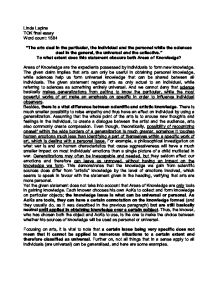 &quot;The arts deal in the particular, the individual and the personal while the sciences deal in the general, the universal and the collective.&quot; To what extent does this statement obscure both Areas of Knowledge?

Linda Lapina TOK final essay Word count: 1584 "The arts deal in the particular, the individual and the personal while the sciences deal in the general, the universal and the collective." To what extent does this statement obscure both Areas of Knowledge? Areas of Knowledge are the expedients possessed by individuals to form new knowledge. The given claim implies that arts can only be useful in obtaining personal knowledge, while sciences help us form universal knowledge that can be shared between all individuals. The given statement regards arts as only actual to an individual, while referring to sciences as something entirely universal. And we cannot deny that science basically makes generalizations from getting to know the particular, while the most powerful works of art make an emphasis on specific in order to influence individual observers. Besides, there is a vital difference between scientific and artistic knowledge. There is much smaller possibility to raise empathy and thus have an effect on individual by using a generalization. Assuming that the whole point of the arts is to arouse new thoughts and feelings in the individual, to create a dialogue between the artist and the audience, arts also commonly create compassion. ...read more.

Being a human more or less means having emotions, and arts indisputably are attempting to deal with our feelings. Whether it is done successfully or not depends on each specific work of art and its audience. An example of such personal, still cumulative issue is human conscience. It is a subject that arts often choose to deal with, but, at the same time, it cannot be generalised. Even two people from the same country and group of society do not share the same conscience, not even talking about different peoples and cultures. It is easy to find examples of different sets of principles. An American corporation can take away the land of native Indians to cut down their rainforests and find nothing unacceptable in it even though their dollar says "in God we trust" and the Bible says, "thou shalt not desire for your fellow human's property". Meanwhile, the Indian tribe can scalp their enemies while they are still alive and not find anything unacceptable in doing that. Of course, the same works of art will not affect these different cultures with different principles of ethics in the same way. Even though possibility to generalise this issue is very limited, there is a universality in being a human and having a conscience and it lays in having ...read more.

In other words, objects that require proof and logical justification should be dealt with using science, and more humane, less rational subjects should be left to be dealt with the help of arts. However, I do not agree with this assumption because that would make the judgements and knowledge on these subjects too eliminated. For knowledge claims to be more justified and legitimate, they should be based upon on a wide variety of sources coming from maximally broad totality of Areas of Knowledge. Using one AoK per one issue would result in the obtained knowledge being obscure and deficient. We can summarise that, to an extent, the given statement is true- both Areas of Knowledge most commonly have different routes of approaching the knower: science appeals to individual through generalizations while arts influence each individual by using the specific. However, art, even though showing us the specific, can lead an individual to form very universal, general knowledge, whilst from generalizations made using science we can also form knowledge about particular. Further on, both AoKs can be compatible in obtaining new knowledge, and it can make our knowledge claims wider, more genuine and justified. This demonstrates that regarding arts as dealing solely with the particular and sciences as purely universal obscures the nature and eliminates the use of both AoKs. ...read more.