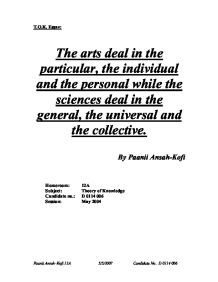 Apparently, the ideas that could be conveyed and exposed to the public by the artist were thought to be so powerful that it was necessary to censor the art itself, mainly because they touched on a variety of very sensitive issues at the time (like political ideology or sexuality). Plato, in what he thought to be his ideal republic, proposed to expel all poets and playwrights and otherwise censoring what they wrote in addition to severely censoring music and painting as well. Today, we also experience the censoring of music and film on a regular basis. People like Plato obviously saw the potential for art to be more collective2. The words used to describe science, like general and universal, would make the implication for example that more aspects of science are unanimously agreed upon so to speak. If I were to think of any Area of Knowledge at all to have this nature, science may not be the first to mind. Even if it had, it could be agreed on that Mathematics better suits this nature, because as a language of numbers it would be difficult to argue that its logic is disputed anywhere. Science on the other hand, has had its flaws amongst thinkers now and then. If we take the theory of the shape of the earth and that of the age of the Earth, Science has not always been conveniently certain or at least practiced in the same way. ...read more.

In any case it turned out that when Hertz measured the velocity of the radio waves he was making m he discovered that his velocities were marginally different to those of light and could never manage to solve the problem. Only after his death did we know what had caused the problem, and, ironically, what one would have thought irrelevant to take into account was interfering with measurements. Indeed the dimensions of the laboratory caused this. This gives us an example where a personal objective was decisive in the outcome of scientific investigation. Hertz based his experiment on a theory which, after his personal judgment, was to prove something and gain credit for it. These traits in the production of art and science begin to show that the arts cannot be distinguished from science in saying they solely deal in the particular, the individual and the personal and science in the general, the universal and the collective. There seem to be ways in which art is also, in contrast to the statement, like science and vice versa. The statement does not provide an accurate and comprehensive way of determining the nature of these two Areas of Knowledge, seeing the similarities between arts and science in the characteristics which are described. ...read more.