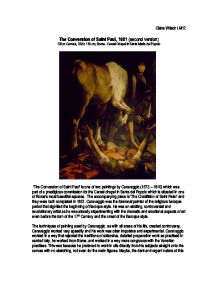 Claire Wilson LM12 The Conversion of Saint Paul, 1601 (second version) Oil on Canvas, 230 x 130 cm, Rome - Cerasi Chapel in Santa Maria del Popolo 'The Conversion of Saint Paul' is one of two paintings by Caravaggio (1573 - 1610) which was part of a prestigious commission for the Cerasi chapel in Santa del Popolo which is situated in one of Rome's most beautiful squares. The accompanying piece is 'The Crucifixion of Saint Peter' and they were both completed in 1601. Caravaggio was the foremost painter of the religious baroque period that signified the beginning of Baroque style. He was an exciting, controversial and revolutionary artist as he was already experimenting with the dramatic and emotional aspects of art even before the turn of the 17th Century and the onset of the Baroque style. The techniques of painting used by Caravaggio, as with all areas of his life, created controversy, Caravaggio worked very speedily and his work was often impulsive and experimental. Caravaggio worked in a way that rejected the traditions of extensive, detailed preparation work as practised in central Italy, he worked from Rome, and worked in a way more congruous with the Venetian practises. This was because he preferred to work in oils directly from his subjects straight onto the canvas with no sketching, not even for the main figures. ...read more.

The colours used in the painting are earthy tones, in the background, muted and dark, and in the foreground more vivid with the red cloth underneath Paul and the oranges of his armour. This means that whilst Paul, the focal point of the painting, is in an unconventional position on the ground he is still obviously important and stands out significantly more than the groom, who is hardly noticeable emerging from the shadows in the top right corner. In addition there are stylistic touches typical of 17th Century artists, such as the masterful effect of texture shown in the discarded Roman helmet in the bottom right-hand corner, the metal truly looks metallic with the touches of reflective light shimmering, in contrast to the soft feathers painted with equal attention to create a completely contrasting texture. Caravaggio's work is often described as a violent reaction to the constrained and academic style of the Mannerists, Caravaggio was revolutionary in creating an intense realism that would have a great influence on later artists. Caravaggio aimed to move his work and art itself forward by abandoning the idealisation of human and religious subjects. Also he focused equally on human figures and inanimate objects - still life. This can be seen in the detailed rendering of the helmet and sword but Caravaggio's skill at still life is demonstrated more fully in works such as 'Supper at Emmaus' (1601) ...read more.

Only the first version of 'The Conversion of Saint Paul' survived and is in the Odescalchi-Balbi collection. Caravaggio was working in a climate of great religious, political and social unrest in Italy, as a reaction to the Reformation and the minimalism of the Protestant faith came the Counter - Reformation. This was a period of time when the Catholic Church reasserted it's power where it could, and Religious Baroque is a style that was forced upon artists by Catholic authorities. This was a time of militant Catholicism, there was a crusade of censorship, indoctrination including the use of propaganda, it was almost impossible for an artist to paint something other than a religious scene. Although Caravaggio was very much a natural rebel and a bohemian, the effects of the Counter - Reformation can be clearly seen through the big commissions of his life, such as the Cerasi and Contarelli commissions. These are typical of the type of art the Catholic Church demanded, art that involved viewers emotionally so they could take part in the religious experience themselves. 'The Conversion of Saint Paul' and 'The Crucifixion of Saint Peter' are archetypal because of their large scale depiction's of the suffering of saints and matydom. To enforce the censorship of subjects disapproved by the Catholic Church financial support of artists working outside the catholic church was scarce. It was because the Protestants criticised Catholicism for being too lavish in regards to art that so many elaborate works of great size were commissioned during this period, works such as this. ...read more.