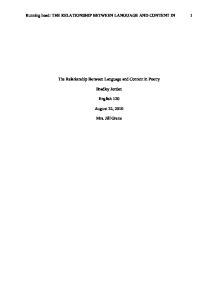 The Relationship Between Language and Content in Poetry Bradley Jordan English 120 August 22, 2010 Mrs. Jill Grene The Relationship Between Language and Content in Poetry Many tallented poets describe words as tools of verbal language used to build an image in people's mind and to move an emotion or win a certain cause. David Waggoner's "Their Bodies", Langston Hughes' "Share-Croppers", and Ruth Collins "The Song of the Factory Worker is three particular poems that were analyzed in comparison styles and the deliverance of words. The three poems have certain features in common. The features between the three poems relates to ethnicity, gender, age, labor and the relationship between life's trials. The author Ruth Collins analyzes the obstacles women faced working in a factory. The "Red brick building with many windows" is an analogy to jail or prison walls. For example, prison walls or jail walls are built with bricks. ...read more.

The female factory worker will sew until she becomes a "tired eyed one." In Langston Hughes's poem, he delivers a much more angry approach. In the beginning of the poem, he states "Just a herd of Negroes Driven to the field." This particular line describes Negroes as silent farm animals, like oxen's or donkeys. They were required to go and work in the cotton field without any recognition of intelligence or individual worth. Langston Hughes openly expresses his opinion in this poem. The reason behind the abuse was the skin color. Hughes is clearly angry and upset because of the slavery with African American workers. The abuse had no clear beginning and the end will not be merciful. David Wagoner's poem, "Their Bodies", is a great and bittersweet piece of work. Wagoner use of metaphors dissected subjects and expressed dignity for the individual. He also made mention to the reader that each procedure was innocent or once a parent. ...read more.

The sweet and settle poem was the "Their Bodies." This particular poem rebels against individuals that acquire knowledge from experience. The body is a dynamic vessel that has a name, past, and family. The old man is described as "scars of steel-mill on the backs of his hands, on the nape of his neck, on his arms and sinewy legs". Assuming that this is not a spiritual work of Jesus, the dead body is a miracle. The readers are reminded to their best to learn "truly and politely." The three poems are written with fantastic, superb, and great metaphoric language. Although the positions are different, the plot of each poem relates working. Whether white or black, old or young, female or male, the poems display dignity for individuals. Reference LaRocco, C., Coughlin, J.(1996) The Art of Work. An Anthology of Workplace Literature ?? ?? ?? ?? THE RELATIONSHIP BETWEEN LANGUAGE AND CONTENT IN 6 Running head: THE RELATIONSHIP BETWEEN LANGUAGE AND CONTENT IN 1 ...read more.