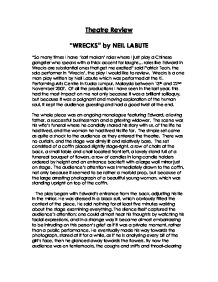 Theatre Review "WRECKS" by NEIL LABUTE "So many times I have 'kari makan' roles where I just play a Chinese gangster who speaks with a thick accent for laughs... roles like Edward in Wrecks are substantial ones that get me excited" said Patrick Teoh, the solo performer in 'Wrecks', the play I would like to review. Wrecks is a one man play written by Neil Labute which was performed at the KL Performing Arts Centre in Kuala Lumpur, Malaysia between 13th and 22nd November 2007. Of all the productions I have seen in the last year, this had the most impact on me not only because it was a brilliant soliloquy, but because it was a poignant and moving exploration of the human soul, it kept the audience guessing and had a good twist at the end. The whole piece was an ongoing monologue featuring Edward, a loving father, a successful businessman and a grieving widower. The scene was his wife's funeral where he candidly shared his story with us, of the life he had lived, and the woman he had lived his life for. ...read more.

By now the audience was on tenterhooks, the coughs and sniffs and throat-clearing had stopped, and he finally introduced us to his wife "Mary Jo". What a powerful introduction! He then began to tell us the story of her life, his own, how the two of them became intertwined and why they would be remembered as a special couple. He mentioned how he was an orphan who had grown up in a children's home where he lived until he was eighteen. This is not what I would normally consider my favourite genre, but because Patrick Teoh is an amazing actor, and because he had been so well directed (by Gavin Yap) I was enthralled by the unfolding story. Patrick's skill was highlighted in his ability to control the pathos of the performance, building up the tension to several heart-wrenching climaxes. I looked around and several of the more sensitive people watching had tears in their eyes at some points. Only a truly accomplished actor could create this realism. ...read more.

By letting the audience know this, he kept them on their toes, making them want to know what it was. From that point onwards everyone knew there was a twist, but they didn't know exactly what it was until the end. This produced a dramatic climax which really made the piece accelerate. Revelation..... He explained what his wife said: her uncle had raped her and she had become pregnant. When the baby was born she gave it away and she had never told anyone. Then as the story started to unfold, the audience were taken to the highest stage of anticipation. He finally surprised everyone by saying "She was my mum". This particular scene created a moment of high dramatic tension and the shock made the audience feel many different emotions. This play includes a mixture of comedy, romance, mystery and tragedy. It left the audience rather stunned - it was certainly not a 'feel good' play, in fact one could even say it was slightly depressing but thrilling at the same time. I think this is why it had such an impact on me. By Jessie Addington ...read more.