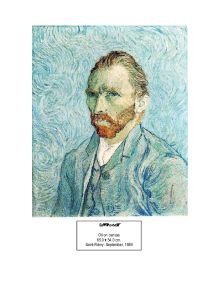 This self-portrait is the last ever self-portrait painted by Vincent van Gogh before he died on the 29th July 1890 as a result of a self-inflicted bullet wound.

This self-portrait is the last ever self-portrait painted by Vincent van Gogh before he died on the 29th July 1890 as a result of a self-inflicted bullet wound. The first thing I notice when I look at the painting is the amount of blue used to create the background, the jacket and also the darker, shaded areas on van Gogh's face. I think van Gogh did this for a few reasons, * One reason could be to show the way that he felt while he was painting, which could of been sad or "blue". This is a possibility as van Gogh was known for his sad lifestyle which would eventually lead to him mutilating his ear after an argument with the artist Paul Gaugin, becoming a voluntary patient at the St. ...read more.

* One more reason could be to give the impression that van Gogh is standing outside and the blue is the sky in the background. I can tell that van Gogh is not at a happy time in his life as his expression is gloomy and miserable. I think that the odd swirls in the background could be seen as symbolic of his mental state at the time. Whilst van Gogh was admitted into the St. Remy Asylum, he continued to paint despite having to work between repeated spells of madness. These spells of madness could have caused van Gogh to construct the swirling, twisted shapes. ...read more.

Divisionism is a system of painting in small dots / brushstrokes of colour placed in relation to each other based on certain colour theories. The illusion of space or depth is not present due to the fact that van Gogh had decided to almost "randomly colour in" the background with light blue and white swirls and brushstrokes. This doesn't add a sense of depth. Nearly all of van Gogh's paintings are done in Oil on Canvas. I think this is a good choice of material for the style that he paints in. If van Gogh was to use charcoal or ink, the desired effect needed in Divisionism would not be achieved. Oil paints are traditionally used on canvas, they are usually opaque and they can have matte, semi-gloss or glossy finishes. ...read more.