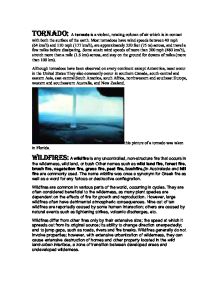 Tornado: A tornado is a violent, rotating column of air which is in contact with both the surface of the earth. Most tornadoes have wind speeds between 40 mph (64 km/h) and 110 mph (177 km/h), are approximately 250 feet (75 m) across, and travel a few miles before dissipating. Some attain wind speeds of more than 300 mph (480 km/h), stretch more than a mile (1.6 km) across, and stay on the ground for dozens of miles (more than 100 km). Although tornadoes have been observed on every continent except Antarctica, most occur in the United States They also commonly occur in southern Canada, south-central and eastern Asia, east-central South America, south Africa, northwestern and southeast Europe, western and southeastern Australia, and New Zealand. ...read more.

Wildfires are common in various parts of the world, occurring in cycles. They are often considered beneficial to the wilderness, as many plant species are dependent on the effects of fire for growth and reproduction. However, large wildfires often have detrimental atmospheric consequences. Nine out of ten wildfires are reportedly caused by some human interaction; others are caused by natural events such as lightening strikes, volcanic discharges, etc. Wildfires differ from other fires only by their extensive size; the speed at which it spreads out from its original source; its ability to change direction unexpectedly; and to jump gaps, such as roads, rivers and fire breaks. ...read more.

The earthquake resulted from complex slip on the fault where the oceanic portion of the Indian Plate slides under Sumatra, part of the Eurasian Plate. The earthquake deformed the ocean floor, pushing the overlying water up into a tsunami wave. The tsunami wave devastated nearby areas where the wave may have been as high as 25 meters (80 feet) tall and killed nearly 300,000 people from nations in the region and tourists from around the world. The tsunami wave itself also travelled the globe, and was measured in the Pacific and many other places by tide gauges. Measurements in California exceeded 40 cm in height, while New Jersey saw water level fluctuations as great as 34 cm. Eyewitness accounts, photos, and videos provided unprecedented documentation of the event. By arif Patel 9h: ...read more.