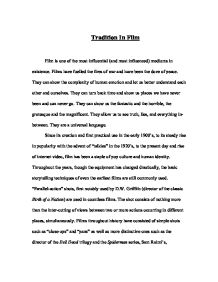 Tradition In Film Film is one of the most influential (and most influenced) mediums in existence. Films have fuelled the fires of war and have been the dove of peace. They can show the complexity of human emotion and let us better understand each other and ourselves. They can turn back time and show us places we have never been and can never go. They can show us the fantastic and the horrible, the grotesque and the magnificent. They allow us to see truth, lies, and everything in-between. They are a universal language. Since its creation and first practical use in the early 1900's, to its steady rise in popularity with the advent of "talkies" in the 1920's, to the present day and rise of internet video, film has been a staple of pop culture and human identity. Throughout the years, though the equipment has changed drastically, the basic storytelling techniques of even the earliest films are still commonly used. ...read more.

They are a few of my many favorite directors and have a few things in common that I have noticed that I have incorporated. They each have a very dark, twisted sense of humor and a distinct visual style. Of course I would love to kid myself that I could create a film on par with O Brother Where Art Thou or Reservoir Dogs or Evil Dead II or Edward Scissorhands. But I'm not going to kid myself. The best I can do is to try to use these influences, as well as those of many other directors I admire, to create a style exclusive to me that shows the world as I see it. I aspire to achieve this by incorporating stylistic and technical aspects of other directors I love into my films, alongside my own innovations and additions. In my opinion, every director should hope to be as creative and self-challenging as Alfred Hitchcock. A pioneer in filmmaking, Hitchcock constantly tried new camera techniques and set pieces to challenge himself. ...read more.

The alternate universe, in which the movie is set, is fully realized and unique from any I have ever seen and the amount of detail that went into creating it is amazing. Its showcases Gilliam's drive and dedication to his original vision. This quality is an essential one to have if I wish to succeed and make movies that I am happy with. Every director has his or her own set of traditions and ambitions. It is the plight of the fledgling filmmaker to establish their own personal trademark, their unique style, while respecting and incorporating the traditions of the cinema. In T.S. Eliot's essay Tradition and the Individual Talent, he speaks of the "inevitability of criticism". This can be overcome by confidence in oneself and love for the art you create. For film is a highly derivative art form, taking inspiration from theater, books, paintings, history, photography, music, pop culture, current events, and most of all, other movies. Good films are homages to other films. Great films are unrecognized homages to other films. ...read more.