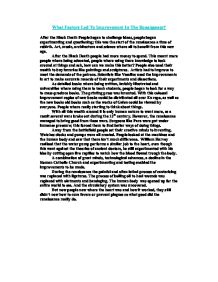 What factors led to improvment in the Renassiance?

What Factors Led To Improvement In The Renaissance? After the Black Death People began to challenge ideas, people began experimenting and questioning; this was the start of the renaissance a time of rebirth. Art, music, architecture and science where all to benefit from this new age. After the Black Death people had more money to spend. This meant more people where being educated, people where using there knowledge to look around at things and ask, how can we make this better? ...read more.

The printing press was invented. With this colossal improvement copies of new books could be distributed all over Europe, as well as the new books old books such as the works of Galen could be viewed by everyone. People where really starting to think about things. With all this wealth around it is only human nature to want more, as a result several wars broke out during the 13th century. However, the renaissance managed to bring good from these wars. ...read more.

A combination of great minds, technological advances, a decline in the Roman Catholic Church and experimenting and testing enabled the improvements to be made. During the renaissance the painful and often lethal process of cauterising was replaced with ligatures. The process of boiling oil to heal wounds was replaced with ointments and bandaging. The human body was opened up for the entire world to see. And the circulatory system was uncovered. But now people new where the heart was and how it worked, they still didn't now how to cure fevers or prevent plagues so what good did the renaissance really do. ...read more.