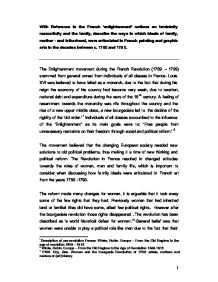 With Reference to the French 'enlightenment' notions on femininity masculinity and the family, describe the ways in which ideals of family, mother - and fatherhood, were articulated in French painting and graphic arts in the decades between c. 1750 and 17

With Reference to the French 'enlightenment' notions on femininity masculinity and the family, describe the ways in which ideals of family, mother - and fatherhood, were articulated in French painting and graphic arts in the decades between c. 1750 and 1790. The Enlightenment movement during the French Revolution (1789 - 1799) stemmed from general unrest from individuals of all classes in France. Louis XVI was believed to have failed as a monarch, due to the fact that during his reign the economy of his country had become very weak, due to taxation, national debt and expenditure during the wars of the 18th century. A feeling of resentment towards the monarchy was rife throughout the country and the rise of a new upper middle class, a new bourgeoisie led to the decline of the rigidity of the 'old order.'1 Individuals of all classes succumbed to the influence of the 'Enlightenment' as its main goals were to: 'Free people from unnecessary restraints on their freedom through social and political reform.'2 The movement believed that the changing European society needed new solutions to old political problems, thus making it a time of new thinking and political reform. The Revolution in France resulted in changed attitudes towards the roles of women, men and family life, which is important to consider when discussing how family ideals were articulated in French art from the years 1750 -1790. The reform made many changes for women, it is arguable that it took away some of the few rights that they had. ...read more.

Her facial expression is also comforting in its tranquillity. Contrasting to the mother, in the scene, the father shows less emotional involvement. He is separate from the small group not only by physical distance, but by his detached attitude expressed in his body language. He faces away from the group, looking over his shoulder with an aloof expression on his face. However, in direct comparison to the father, the husband of the wet-nurse is far more emotionally involved in the scene. He leans forward with his hands clasped and a concerned expression on his face. He shows much more of a paternal instinct than the child's actual father. In a sense Aubry is arguing that upbringing means more than 'simple blood ties'10 as the child is turning towards the more loving couple. From an enlightenment perspective, the emphasis on the mother and maternal love shows how the mother was considered the more important role player in a child's upbringing, Aubry is arguing for the importance of a paternal role a child's life.** This painting differs to the common representations of breast-feeding of the time. Many 18th century French lithographs of the time depict wet nursing in more suburban environments, which had a bad reputation for its high infant mortality rate. In 'Farewell to the Wet Nurse' however the rural setting seems to have benefited the child who is obviously healthy. Despite the apparent concern of the wet nurse towards the child she is a professional whose employment has terminated. ...read more.

The grandfather looks down in approval at his son picking up his own child. In consideration of anterior family relationships there is a possibility that the grandfather did not pay as much attention to his son. His contented expression indicates that he approves of this new style of parenting. The couple are shown on an equal level in the painting, showing a loving balanced relationship towards their children. The mother is still strategically central to the painting, reminding us that the mother is the most important member of the family. But Aubry is 'advancing a new ideal of life'17 showing how a balance, how love from both parents provides a better environment for the child to grow up in. The 18th century started seeing the morals of the 'old order' as increasingly immoral, and new beliefs that ones childhood was directly linked to the psychological makeup of an adult made enlightenment believers campaign for a more united family life style. As a result marriage was regarded as 'the happiest, the most civilised, and the most natural of states, the institution that could best satisfy and conciliate social and individual needs,'18 and more time was dedicated to the upbringing of ones children. Femininity and motherhood became a sacred and central theme in familial representation. Enlightenment artists, primarily Greuze and Aubry, campaigned for the promotion of these ideals, thus portraying them in their post revolutionary art works. By making their artworks naturalistic and idealistic, these moral issues were put across to the public in an approachable way, so that they too would choose to adopt these morals and improve their family lives. ...read more.