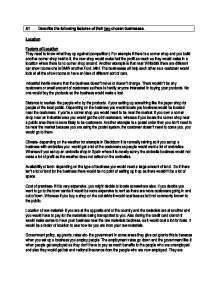 A1 Describe the following features of their two chosen businesses. Location Factors of Location They need to know what they up against (competition). For example if there is a corner shop and you build another corner shop next to it, the new shop would make half the profit as much as they would make in a location where there is no corner shop around. Another example is that near Whitebirk there are different car show rooms one is BMW another Ford, Mini. The businesses all help each other as a customer would look at all the show rooms to have an idea of different sort of cars. Industrial inertia means that the business doesn't move or doesn't change. There wouldn't be any customers or small amount of customers as there is hardly anyone interested in buying your products. No one would buy the products so the business would make a lost. Distance to market- the people who by the products. ...read more.

Whereas if you buy a shop on the out skirts it would cost less as is it not commonly known to the public. Location of raw material- if you are at the opposite end of the country and the materials are at another end you would have to pay for the materials being transported to you. Also during the credit card crunch it would make sense to have your business near the raw materials business, as it would cost a lot for fuels. It would be a factor of location to see how far you are from your raw materials. Government policy, eg grants, rates etc- the government in some areas they give out grants this is because when you set up a business you employ people. The employment rates go down and the government like it when people get employed as they don't have to pay as much benefits to the people who are unemployed and also they would get tax and national insurance from the people who are now employed. ...read more.

Labour Supply- If you need people to work in the business, you would need employees near the business. People generally don't want to travel for a long time. If you're a specialist business would need to be near employees. Can you get the employees you need in that area? It would be a possibility locating near a large population or near a university or college were they train the people in that particular job. If it's a specialized job they would need a lot of training so they would need employees who are trained to do it. Are there people in that area who can do those jobs? Personal reasons-There might be personal reasons eg if you're a mother with small children you might want to locate your business near the school so you can pick them up easily. The owner of Promethean Tony Cann had personal reasons as he wanted to set up near where he lived. There are all sorts of reasons why people set up on a certain location; the business wouldn't have to be generally a large business. Friends may be a main sort of customers as they would have a bound with the business. ...read more.