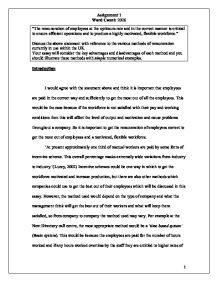 “The remuneration of employees at the optimum rate and in the correct manner is critical to ensure efficient operations and to produce a highly motivated, flexible workforce.”

Discuss the above statement with reference to the various methods of remuneration currently in use within the UK.

Your essay will consider the key advantages and disadvantages of each method and you should illustrate these methods with simple numerical examples.

I would agree with the statement above and think it is important that employees are paid in the correct way and sufficiently to get the most out of all the employees. This would be the case because if the workforce is not satisfied with their pay and working conditions then this will affect the level of output and motivation and cause problems throughout a company. So it is important to get the remuneration of employees correct to get the most out of employees and a motivated, flexible workforce.

‘At present approximately one third of manual workers are paid by some form of incentive scheme. This overall percentage masks extremely wide variations from industry to industry.’(Lucey, 2002) Incentive schemes could be one way in which to get the workforce motivated and increase production, but there are also other methods which companies could use to get the best out of their employees which will be discussed in this essay. However, the method used would depend on the type of company and what the management think will get the best out of their workers and what will keep them satisfied, so from company to company the method used may vary. For example at the Next Directory call centre, the most appropriate method would be a ‘time based system’ (Basic system). This would be because the employees are paid for the number of hours worked and if any hours worked overtime by the staff they are entitled to higher rates of pay, depending on how busy it is or what occasion it is. The usual overtime rate is either ‘time and a half’ or ‘double time’.

The first method of remuneration I will discuss are ‘time based systems’. There are two types of time based systems, firstly there’s the ‘basic system’ then there is the ‘high day rate system’.

The basic system is where the employees are paid for the number of hours worked and not necessarily how much they produce. So they may have contracted hours per week and they get paid a basic rate per hour. However, the workers can gain advantage of receiving more pay by working any number of extra hours outside their contracted hours. This usually is at a good rate, for example as stated before at the Next Directory their overtime rates are ‘time and a half’ and ‘double time’ (1 ½ * basic rate per hour). However, this would vary depending on how busy it is and when the overtime was actually done.

Advantages of this method are that it is easy to understand and manage. There are also straightforward wage negotiations as the employees are paid at one basic rate and also the workers are not penalised for any stoppages that may occur which may be not their fault. So they would still receive their hourly pay no matter what the situation.

However, the disadvantages of this method are that there is no real motivation to work. Additionally all the workers are paid the same rate per hour regardless of how much effort is put in which could affect their future performance levels and output. And finally high-quality supervision is required to make sure that everyone is working and this can be costly.

High day rate systems. This system is also a time based system but in this method the difference is that the employees are paid at a higher rate per hour for the more they produce. This method is intended to provide a good motivated workforce as the management is prepared to pay higher rates of pay in return for a substantial increase in performance and output levels. To get the best out of this method it is important that all staff and unions agree and conduct a lot of research before hand. This method would be best suited for car manufacturing companies or domestic appliance manufacturers as the more cars or items you produce the higher the rate of pay will be. So this should motivate employees to increase output, then not only the staff benefit but also the company benefits from more production.

‘As production rises the hourly rate of pay goes up’

The advantages of this method are that it attracts good quality staff as they know that they can produce and gain a lot from the high day rate system. Another advantage is that this method can motivate employees as it will ‘push’ the workers to produce more, as they know they can benefit from an increase in pay unlike the basicsystem. This method is also easy to understand and manage like the basic system.

The disadvantages of this method are that the best employees may be steered away from the company by other employers offering higher rates per hour thus cancels out the original effect.

Bonuses are also on offer in time based systems such as shift bonus, timekeeping bonus and continuous working bonus which could be classed as an incentive to work and produce more.

Piecework is where the workers are paid a fixed amount per unit for however much they produce. So the more the employee’s produce the higher their pay will be. So in this system there’s an incentive for workers to increase output, and then not only the workers benefit but also the company should benefit from the increase in output. Piecework is usually accompanied by guaranteed day rates and in lieu bonuses. This is in case of any delays or shortages so the workers still get paid.

An example of this could be:

Advantages of piecework are that it motivates employee’s to work and produce more as they know what their reward is in return. Also the company benefits as, if output levels decrease then so does pay, so the company would not be paying staff for no work being done, where this could be the case in time based systems. Another advantage may be that this method is good for workers who can earn more, as it’s down to the individual and how much they produce.

The disadvantages of piecework would be that problems may arise due to stoppages. Also problems caused by slow workers as they will not be producing as much and then may cause conflict between other staff. Another disadvantage may be that quality problems may arise as the employees will be keen on producing more so expensive inspection may be required for this method. And finally it is difficult to calculate and negotiate each individual’s salary.

The advantages of this method are that an incentive is provided to work just like piecework. Another advantage is that a minimum pay level is almost guaranteed as even if there are stoppages or delays the employees can still be assured that they will get paid unlike piecework. Also similar to piecework this method can be good for the organisation as there is a good chance of higher production levels. The workers also benefit from this method as they can gain advantage of the increase in rate.

However, the disadvantages of differential piecework are that quality problems may arise as the workers are keen to increase output so they can benefit from the extra income. This method is also difficult to manage and problems may arise in negotiations.

Incentive schemes are there to motivate employees and to increase output. Most incentive schemes are linked to payment and output, as the workers get paid for how much they produce and the effort put in. The employee can benefit from incentive schemes by an increase in pay as a result of the rise in production. In this scheme some general rules are that pay should directly reward effort and should also be recognised by other employees. The scheme should be simple to manage, be fair and also a minimum level of pay needs to be set to insure the workers some safety incase of any production problems that may occur which are out of their control.

Some advantages of incentive schemes are that it can motivate employees as they can earn more for putting in more effort. This method also can lead to an increase in production and also increases wages but at the same time can reduce the company overheads per unit, so everyone can benefit. Another advantage may be that more resourceful workers may want to work for the company as they know they can earn higher wages.

Disadvantages of incentive schemes may be that some of these schemes can be quite expensive and difficult to manage. Another disadvantage may be that workers who have easier tasks may earn more then the workers who have more difficult and time consuming tasks, this could cause problems in the relationship between staff and also would prevent the company having a motivated, flexible workforce.

Group incentive schemes. This is where work is done in a group and then the bonus would be shared out between the group. This scheme would be most appropriate in jobs such as coal mining, production line manufactures and where it is difficult to measure individual effort.

Some advantages of this scheme are that a good team spirit may build. Also this makes it easier to work out the wage for the workers and this scheme is easier to manage.

However, some disadvantages of this scheme are that each member of the group still receives the same bonus regardless of the effort they put in and this can cause problems within the group.

Profit sharing is where the employees get a share of the company profits depending on how much their salary is. This can be given out in cash or in the shares of the business. However, in some cases employees can earn large sums of bonuses which are significantly higher then their normal salaries so this scheme can be largely beneficial.

Advantages of this method are that this method can motivate employees as this would make them feel a part of the company. Also it is good for the organization.

Some disadvantages are that they may come a time where the company does not make enough profit to share out and this can result in the staff walking out on the business.

I would agree that the remuneration of employees is important and does play an important role in increasing output levels and getting a motivated, flexible workforce. However, there are also other factors other then financial rewards which can motivate the employees. Examples of this may be Maslow’s hierarchy of needs and Herzberg’s theory x and y motivation theories, where workers find rewards other then financial ones such as ‘getting a promotion’ or ‘receiving a company car’ more motivating and this can also lead to an increase in output and a flexible workforce.

So the remuneration of employees at a good rate and in the correct way is important to get the most of the employees and get a motivated and flexible workforce, however, there are also other factors other then pay which can motivate employees.