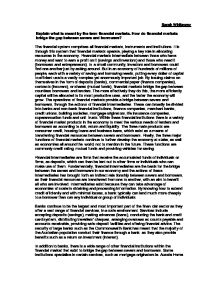 Sarah Whiteway Explain what is meant by the term financial markets. How do financial markets bridge the gap between savers and borrowers? The financial system comprises all financial markets, instruments and institutions. It is through this system that financial markets operate, playing a key role in allocating resources in the economy. Financial markets intermediate between those who have money and want to earn a profit on it (savings and investors) and those who need it (borrowers and entrepreneurs). In a small community, investors and borrowers could find one another just by asking around. But in an economy of hundreds of millions of people, each with a variety of saving and borrowing needs, putting every dollar of capital to efficient use is a vastly complex yet enormously important job. By issuing claims on themselves in the form of deposits (banks), commercial paper (finance companies), contracts (insurers), or shares (mutual funds), financial markets bridge the gap between countless borrowers and lenders. The more effectively they do this, the more efficiently capital will be allocated to its most productive uses, and the faster the economy will grow. The operations of financial markets provide a bridge between savers and borrowers, through the actions of financial intermediaries. These can broadly be divided into banks and non-bank financial institutions, finance companies, merchant banks, credit unions, building societies, mortgage originators, life insurance companies, superannuation funds and unit trusts. ...read more.

Finance companies, such as SME Venture Capital Brokers, provide mainly short to medium term loans to households and small businesses. In this way, they are similar to credit unions however they differ as finance companies aim for a profit while credit unions do not. Their relationship between borrowers and savers is however still clear: they both act as a bridge of the gap between borrowers and savers. Merchant banks borrow on a short-term basis from companies with surplus funds, and lend these funds to other large corporations for business expansion purposes and government agencies. When comparing total assets, merchant banks encompass the largest segment of the non-bank financial intermediaries. An example of a merchant bank is Commercial IBT. Permanent building societies bridge the gap between savers and borrowers by accepting deposits from the public (savers) and providing funds mainly for home loans (borrowers). Due to State law amendments, permanent building societies can now also offer other personal and business loans however they are still mainly involved in home loans. Life insurance companies, such as Norwich Union, are part of the financial market as they acquire funds in the form of premiums from their policy holders who invest in life insurance. They then use this to buy income producing assets, for instance shares, debentures, government securities and real estate, as well as making loans to business firms and individuals. ...read more.

The importance of this matching function is perhaps best demonstrated by the failure of state-managed economies, in which governments rather than markets do the matching. No centrally planned economy, such as former U.S.S.R, has come close to the efficiency that the financial marketplace achieves as a matter of course. Through all three of it's major functions, finance connects Australians with each other and the world. Firstly, by rating a person's credit and providing a quick and reliable payments mechanism, the company issuing his credit card allows him to make purchases by telephone from companies that know nothing about him and are located thousands of miles away. Mutual funds give each Australian the ability to invest in products and services being provided by millions of diverse economic agents without actually requiring any two of those agents to even converse with one another. And lastly, by providing vehicles for saving, markets and intermediaries allow each generation to bequeath a wealthier future to its children. Financial markets bridge the gap between savers and borrowers by providing a marketplace where debt and equity can be transferred, providing a return for those who have excess funds or savings, while making loan funds available to those who need additional money. In short, the financial services industry and hence financial markets, connects Australians to each other not only today but across decades. ...read more.